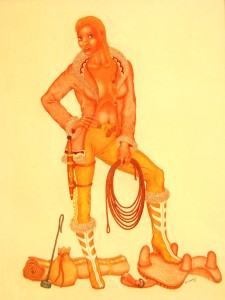 I’m proud to have A.J. Campbell on the blog. And gobsmacked by his steppe women. He’s the author of The Demon’s Door Bolt, and another novel to be out shortly, both of which are very strong on fighting women. I discover he’s also an artist. Here he is:

Thems what was real womenses, arr!

Steppe women have always intrigued me. Oft enough, they rose to greatness, as seen in the great number of female warrior burials. Some were buried in kurgans not reserved for just kings; and at least one woman – the so-called Golden Man of Issyk – achieved a status beyond the greatest of steppe chieftains. So, there really was a historical Xena. 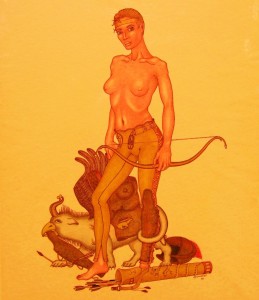 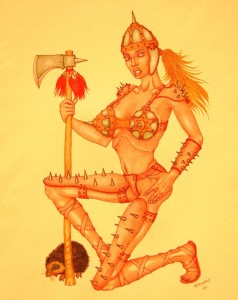 I’m not a prolific painter, especially when writing novels… which is most of the time, lately. But somehow, I’ve managed to dry-paint a few women warriors. My art tends to reflect my humour, which might not entertain everyone. Each painting is on vellum, similar to the art of the late Alberto Vargas. In essence they are ‘cartoons’ reflecting the nearly-dead pin-up genre of the 1930s and 40s.

Rokhshan (with a gryphon’s egg)

Behind each semi-realistic work, there’s an underlying truth. They are women who can hold their own against any man. More important, they are heroic, not passive reclining nudes. My favourites are The Horsebreaker, a brazen Alan woman replete with lasso, horned saddle, tamga iron and Sogdian blanket (a painting so outrageously priced that no-one will ever buy it) and Penthesilea’s Little Helper (with its baby gryphon).

Bryn back
Thanks, A.J. Another favourite of mine is Brunhild in spiky armour with a hedgehog, and she’s here although she isn’t steppe (so these are the spangens?) Rokhshan was Alexander’s wife, and A.J. had to tell me there’s a joke in there, because I wouldn’t recognise a football or a Corinthian football helmet.

I notice I’ve got him talking Xena. A.J.’s met the age of 70 (I hope he doesn’t mind me dropping that) and gave up the idiot box before Xena leapt into our lives; I’ve been telling him he missed a pop culture fighting-woman icon, if nothing else.

You can find these and others for sale on his End of Days Press website – along with a fantastic little shop for re-created arms and armour, horse bows and swords, steppe helmets, the akinakes as featured in The Demon’s Door Bolt, and even your steppe accessories. A.J. Campbell is an archery instructor and a living-history reenactor, and him and his make the weaponry.