Whenever you pick covers, there are those you almost chose or wish were possible to you. So I just have to exhibit a few great images I didn’t use.

For a book titled ‘The Sheep from the Goats’ and to do with Mongols, the above was an obvious resort. It’s quite famous: painted by a Zhao Mengfu in the Yuan Dynasty (that’s the Mongols in China), it’s thought to be a comment on the question, whether or not to work for the Mongols. There were Chinese scholar-officials who refused to serve under the Mongols and kept an ivory-tower aloofness; others argued for useful service, yes, even with barbarians in charge. After ten years in the ivory tower Zhao Mengfu agreed to join the court of Khubilai Khan, and defended his stance against the criticism of peers. His stout, stuffy sheep feels lofty next to his combative, more energetic goat. 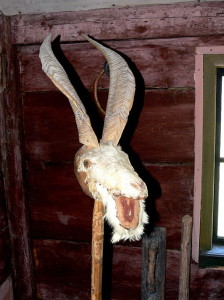 Another goat I found – in case you’re keen on goats. Here’s a totem-style Yule Goat from Gotland, an 18th-century farm now a museum. 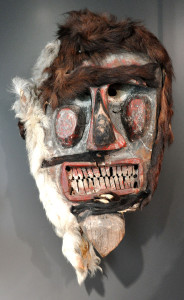 Getting away from goats. When I began to think about animalistic masks, I found this Swiss carnival mask, in the Museum Rietberg, Zurich.

It’s great, but we went to Africa instead. I’ll have to post on the African masks, but it’s a subject new to me.

And here’s what else I found on David with the head of Goliath: 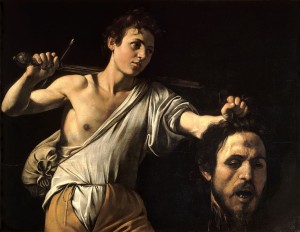 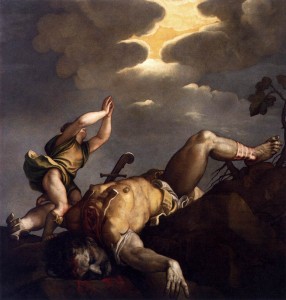 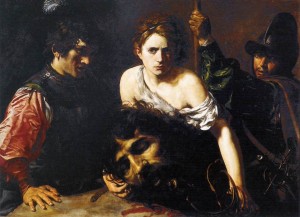 And one by a certain Valentin de Boulogne

I did notice, on my search, most Davids were too dainty, too fastidious to touch the head, never mind haul it by the hair, as Caravaggio’s does: they posed beside it with their hands off. Caravaggio, of course, knew about the seamy side of life, wasn’t a stranger to blood. No-one else even thought to try an expression on David’s face like to my chosen Caravaggio.