“Throughout Turkic literature, human and superhuman faculties are attributed to horses. Not only are these generally gifted with human speech and reason, but they are superior morally and intellectually to the heroes themselves.” – Chadwick’s Oral Epics of Central Asia.

In steppe art, too, the horses talk. Take this bloke: 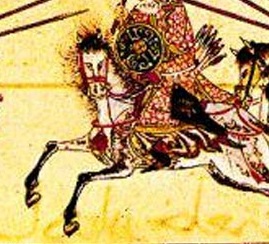 He’s being galloped into the fray – a sad affray of Mongols against Mongols. And the people are lusty about it, but the horse is going, yes, this seems like a bloody great idea.

His eyes are set at the front of his head. Unanatomical, and done for effect: that’s so he can make eye-contact with us, and comment on the scene. This horse is definitely smarter than the humans.

Portrait with Horse is one of the commonest subjects in steppe art, and often the horse has more expression than its person. Which happens in the Secret History: Horses always have their features documented when they trot into the story, unlike the people on them; we’re told that Tchingis got his fatal injury in a fall from a red-earth roan, but for Tchingis’ own looks we have to consult Chinese travel journals and Persian war reports.

Here’s a Jurchen hunter (he’s squinting at his arrow) and a sheepish sort of horse, with his eyes on us again. 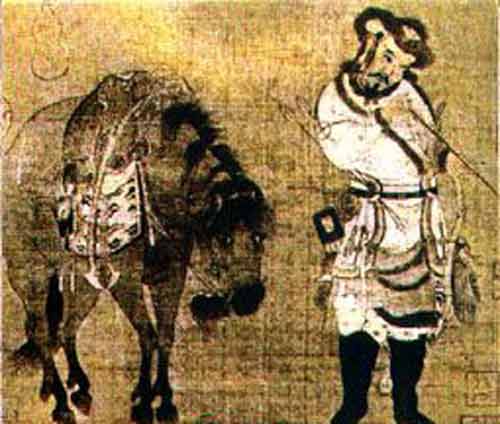 I guess your average nomad saw more horse faces than human, daily, outside the family ger.

I thought I was being clever in the quarrel between Temujin and Jamuqa, late in book one: Jamuqa’s mare catches his mood and starts to give his body language for him, as Jamuqa becomes too deeply agitated to tell us how he’s feeling – even in pov – he can’t think about himself and only notices the antics of his mare. But no, I’m a rank amateur in use-of-a-horse. I’ll have to do much more with my horses in book three.