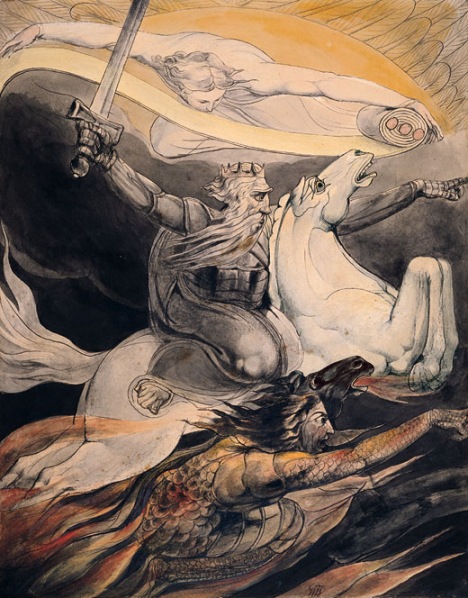 This won’t be my horse for Three, but as you can see I have my eye out already. Here’s a William Blake rendition of ‘Death on a Pale Horse’ — after the Turner of that name we have on the cover of Two. It’s fairly perfect, at least to think about Three with. Is that a History scroll above? Is that, beneath, a black horse and a driving spirit whose name might be he of the Black Tuq… my Jamuqa drives my Temujin in these wars — psychic presence though he is. Imagined? Is Temujin mad these days? In our terms, no doubt, but what about his own? Whatever the case, he leans on Jamuqa for the work he has to do in Three. Like the face in the Blake, he’s committed but freaked out, and you notice the wild spirit’s ahead of him. He feels he has a mission in/from history, yes. History accumulates in Three (a weight on his shoulders, and a struggle for me: how to make that history digestible). There was a quote I liked very early on, from a Joachim Barckhausen, L’Empire jaune de Gengis Khan, Paris 1935:

Genghis Khan was certainly one of those men — perhaps the greatest — who made history. But he could only become it because History created him. He acknowledged this role by trying to understand it and play it, by subordinating himself to it, by serving it...

I’ve always thought there’s something in this, and Ile Ahai has been ruminating on it ever since (he owes at least one speech to Joachim Barckhausen).

This morning I thought I might need a nightmare horse, Fuseli-style, or a war horse done in horror fashion. Or else, the one-horned beast leapt to mind too. The unicorn vision they have in India has become significant in my telling — maybe he’ll belong on the cover, for the Wonder side of my draft, to-be-ditched title, Wonders and Horrors. Can I fuse both?

Meanwhile I like this Blake, to think by. Temujin an old king (hey, he’s only sixty at the end, but let’s exaggerate in picture) and believes he’s on a white horse, doesn’t he? In China white is for a funeral, white is death & ghosts, whereas on the steppe white is blessed and the holy ride white horses. Chinggis has a white tuq for his days of peace, a black tuq when at war. When he gives the reins to Jamuqa (unaged, dead at 39, in scale armour or just scales), lets the black horse loose… Jamuqa being, at this point, a figment of his mind, his attempt to be Jamuqa may end up worse than Jamuqa. “Nobody stopped me,” Jamuqa said once.

The unicorn stops him. We may yet have a unicorn.

5 thoughts on “thoughts of Three”