I’ve driven my sister crazy with possible covers for the first. But we have a winner: Delacroix, ‘Tiger Attacking a Wild Horse’. This is so similar to steppe art I’m astounded. I can guarantee they’d have loved this.

Fighting animals were always a topic:

Fourth from the trunk was one of those thousand-year-old themes: The War of the Animals. “Here’s a hard one.” It was life on earth as a grim struggle, animals pitted one against another. In an abstraction, a distillation, they were coupled as you like, they didn’t have to be enemies, and griffins and rocs were included. The scene was after a hand-to-hand scrimmage in battle or a melee in wrestling, no space left in the jostle; and in each distinct fight neither opponent unambiguously winning, but locked together by tooth and claw and horn – eagle and tiger, argali ram and snow leopard, wolf and unicorn impaled, imprisoned each other. Most of their visages were turned outward, grisly and awry. “Do grizzled old warriors stand in front of this and say, I have often felt life is like that?”

Here’s an anatomy of the ideal horse, from steppe epic: 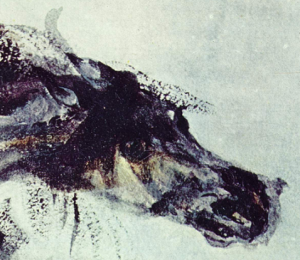 His nostrils quiver as briskly as the gills of a fish; he has a hare’s haunches, a weasel’s spine, legs from the gazelle; the crest of his neck he arches like the peacock; his head a serpent’s head, dainty and neat and erect.

This fellow is also blue. Slightly blue, and I’ve noticed a number of blatantly blue horses in steppe art. We do have several blue roans in the story; Temujin’s fond of blue roans.