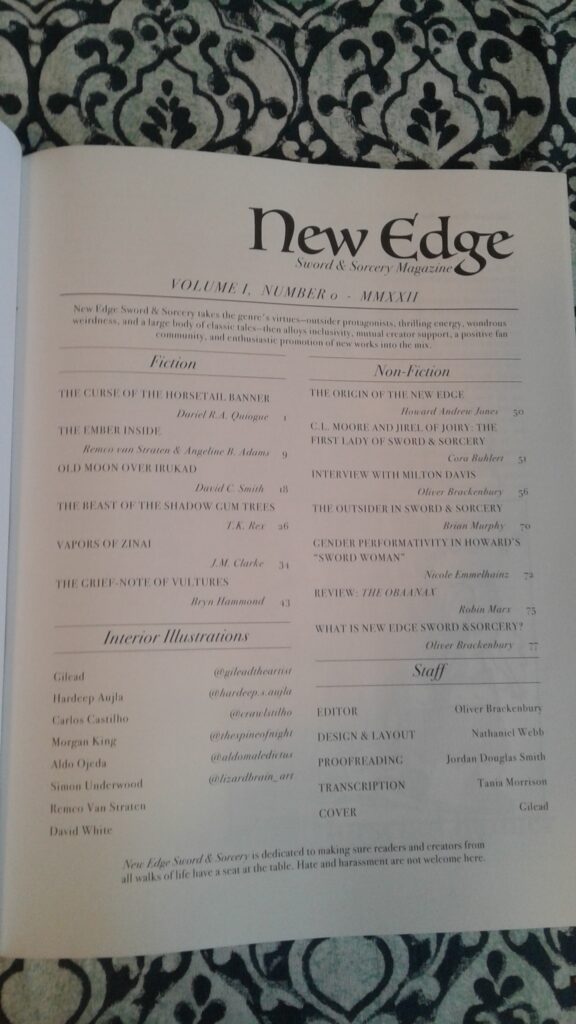 I have another story out, this one quite Amgalant-adjacent: ‘The Grief-Note of Vultures’ in New Edge Sword & Sorcery Magazine.

It’s set in a fantasy version of Tangut (the ‘Great State White and High’) in the late 12th or early 13th century. This is where I’m at in writing Amgalant Three, Scavenger City: off-steppe, the fringes of the steppe, contested frontiers between steppe and settled. That’s where my head is, and so this story.

My fantasy-Tangut is a bit of a dystopia, at least for nomads. Those steppe frontiers have a history—and an urgent present, at the turn of the 12th-13th century—of forced settlement, of anti-nomad policies. As well, Tangut was a place of steep inequality, as disclosed to me in The Economy of Western Xia: A Study of 11th to 13th Century Tangut Records by Shi Jinbo—an invaluable close-up on Tangut in open access.

The story plot began with a tidbit I glimpsed years ago: a hell scene that seemed to be a semi-realist picture of torture, state-comissioned shortly after the conquest of the area. A caption speculated that the atrocities of conquest were re-interpreted in this religious art, in validation or even in an obscure contrition. Well, that has gone into my draft for Scavenger City, and I pulled it out to serve as the nub of this short story. For Tangut and its art, visit the site of the International Dunhuang Project

What else is historical in the story?

On spirits, my human-animal amalgam-spirits and spirit behaviour in general, as always, my first source is Shamans And Elders: Experience, Knowledge And Power Among The Daur Mongols by Caroline Humphrey with Urgunge Onon. I cannot say too much about this book, but said a bit in my Goodreads review.

I have a woman ‘king’ of bandits. She is inspired by Yang Miaozhen, who led a force of ten thousand bandits in the chaos of North China under Mongol invasion, and when she went over to the Mongols, was appointed to a governorship by them. I feel that this commoner woman’s career, as bandit leader and as governor, was only possible in the chaotic situation, and so I link my bandit with chaos. On Yang Miaozhen, the necessary article is ‘Yang Miaozhen: A Woman Warrior in Thirteenth-Century China’ by Pei-Yi Wu in the journal NAN NÜ: Men, Women and Gender in China (2002).

Angaj-Duzmut and friends have other stories in progress. I have cast them in pre-Chinggis Tangut, with the thought that in future I can have them live through a fantasy Mongol invasion. On Chinggis Khan and Tangut, see my rather long post. 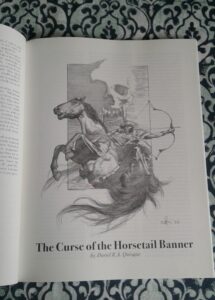 There is a second steppe-related story in the magazine. ‘The Curse of the Horsetail Banner’ by Dariel R. A. Quiogue riffs, fantasy-style, on Chinggis history. Seen here with art by Hardeep Aujla.