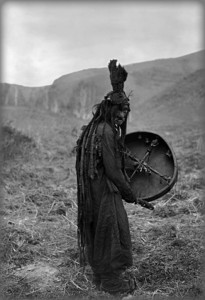 Fugitive shaman chased by a photographer

To Soviet anthropologists, shamans had to be either insane or conscious frauds. With this assumption they set out to study them.

And what are our assumptions? Aren’t they uncomfortably alike? It’s troubled waters for your average rationalist who’s sworn, on heavy forfeits, not to demean the people she writes about – that’s me.

Me and where I start from, my axiom and vow: These people were as intelligent as you and I. Do not dumb them down. Because dumbing-down is oh so easily done in the area of old or obsolete religion, but remains an error and an insult and they ought to haunt you for it. Science can tell you brains haven’t evolved since the 13th century. Don’t just pay lip service to that, implement it in every sentence you write about them, or may they blow rude noises at you.

I have to assume the opposite of a Soviet scientist – mostly. Insanity has traits in common, you might say, and can give clues. Fraud? Shamans were aware of an audience, and a few tricks up one’s sleeve won’t go amiss: I’ve seen that cheerily admitted by shamans who take their real work very seriously. There are levels. It was always hard to get a shaman to give an ‘authentic performance’ in front of a scientific observer. When observation proved impossible to ignore a shaman might have to act, and overact. 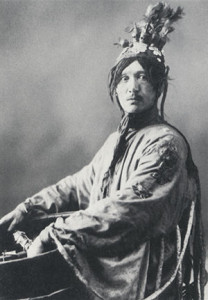 Putting on the spooky

You’ve never met a more determined set of religion-bashers, believe me, than Soviet-era anthropologists, whose reports are a big percentage of what we have on still-living, still-functioning shamans, before the shop closed down (it’s open again, sort of). A thing they mightn’t have expected – and we mightn’t either – is the critical spirit that pertained. Shamans were used to an audience, and a sceptical one. That audience – that clientele – is on the alert for tricks, and familiar with shamanry; the scientists found them far from dupes, ready to believe whatever was thrown at them. They had stern tests for their shamans, and if they weren’t bamboozled they weren’t impressed. It’s when the shamans managed to flummox this audience that the scientists too scratch their heads.

The anthropologists have to record instances they can’t explain. It can be stunts with knives and fire, but often it’s knowledge: shamans earn a hard-earnt trust with pieces of knowledge – maybe trivial, maybe irrelevant to the case in hand – and though the anthropologists impute to them an espionage of the class they have back home, they’re left with unexplainables. 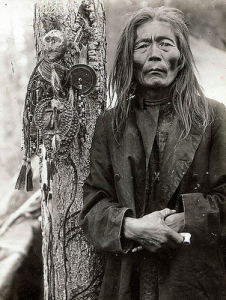 Watch what you say about me

That’s why I put an unexplainable into my story. Because if I didn’t, I’d be false. Shamanship was such an art a Soviet scientist can’t see to the bottom of it: how the heck would I? I’m not without a partial theory on how my shaman knows what she knows, but if I presented my shamans as fully transparent to you and me, I’d be untrue – and unjust – to historic shamans. My aim is to be true to life. Me pretend to understand a shaman? No, that’s not true to life.

As for shamans’ insanity… I’ll leave that for another post. Maybe Jamuqa can guest-post on that, being loopy as a Merqot lasso.

[Jamuqa’s voice] If that’s an attempt to stir me up into a guest-ghost-post, try harder.

Jamuqa, that’s about as dirty a thing as I can say to you.

I noticed. What’s with that? 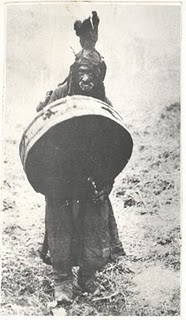 Our first shaman clutches his drum against intrusion. These photographs are telling, aren’t they? 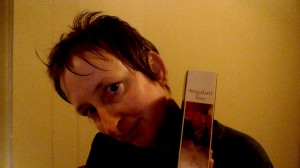