I’m 50 today and kids, it’s tough to turn 50. I’ve had a questioning week. You’re lucky you’re not getting a post called Futility at Fifty, but instead, by grace, I’m in the mood to thank a few people.

First my sister, without whom. Every book of Amgalant has this dedication:

My sister has been godmother to the book. Amgalant, what’s written and what isn’t written yet, is dedicated to her, with waves from Tem and Jam, and no sight or scent of a goat. In steppe epic, a steed and a sister are your trustiest, most intelligent and indefatigable aid: the hero doesn’t have to be heroic, but these do.

When gloomy in the past week, I browsed writers’ blogs for the harsher side of the writing life. The sad experience is, numbers of writers operate without support from those closest to them – or with active sabotage of their attempt to write. One comment I saw this week I understood: a writer said she found dedications in books hard to read. A few years ago, I did too. You don’t like to confess it. But those dedications that go, ‘my wife lived with this novel for five years, and listened to my instalments every evening at dinner…’ I mean, frankly, you think, poor wife, don’t you? And if you’re me you think, I don’t know how to ask that of another person, even if I believed you should, and I have to believe you shouldn’t. Neither do I happen to know, in person, of writers with this sort of husband; if you do have a significant other like this, value them and for God’s sake don’t ask too much. It can hurt to see dedications. Because of the ones you don’t see: ‘I wrote this alone and nobody helped.’ I felt like that a few years ago, but I was with a man who gave me daily discouragement. I think he sensed – and he was quite right – that the novel was the only thing to have come along that mattered to me as much or more than he did; and it was a shock to him, who had been the centre of my attention. I left the man and kept the book, as any sensible writer does. People don’t write dedications such as that in published books, and so struggling writers only see the nice ones. On blogs, in writers’ groups online, is where you see admissions of the real situation. There are writers who have to function in the total absence of support from husband, children, family and friends. I know how lucky I am to have my sister. Without whom, I’d be a worse person and possibly no writer.

At slight risk of embarrassment to him, I next want to thank Don Jansen, because he’s the perfect reader, of whom we writers dream. Why is he the perfect reader? He’s an intelligent, curious reader who ranges widely, without prejudices. He reads at the high end too but has no genre prejudice; and nor does he avoid the self-published. Bless his socks. While one can count one’s readers on one’s fingers (or at least, readers who don’t wish I were Conn Iggulden – because folks, I never set out to be, I never shall be; live and let live, I wish him well) – in that situation, a single reader can make it feel worthwhile. Sorry to embarrass you, Don.

Thanks to fellow novelists. For instance, I assured Gary, twice, he shouldn’t feel he has to read mine – his subject had been a hook to me but I couldn’t see he had any earthly interest in Mongols – still, he read it on the quiet and surprised me. John, no doubt, is too much of a gentleman not to have returned a read; even so, it was in no way incumbent upon him to read Two.

Thanks to Joseph. It’s hard even to place mine with book bloggers, I think, and therefore, to have his professional reviews, of both One and Two, is invaluable. To be honest I can’t work out how ‘professional review’ is defined in the indie context – I certainly don’t mean paid reviews, which I abhor. Whatever, I know he’s a professional, and his opinion has mattered as much to me, in its own way, as the coveted ‘reader-only’ opinion.

That’s it. I’ll go away and be fifty now. You’ll excuse that I complain about this fact online; I’m a solitary creature and when I talk I tend to tweet or blog. 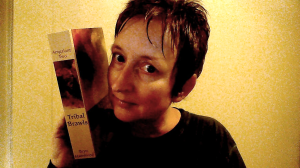 When I was 49, with heavy book on shoulder. I tried to do an imitation-shot after Joy Hester’s ‘Girl with Book on Head’ – which is such an identification-picture for bookish girls – but the shot didn’t work out. 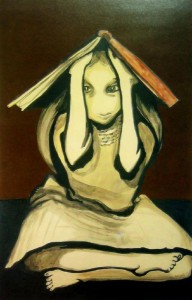