or, A Hymn to Idioms 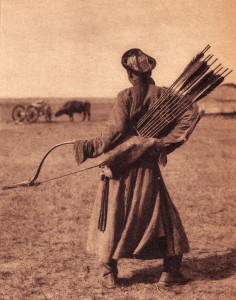 Slang, idioms, figures of speech: I love them, love the use of them; they individualise your talkers, and with a culture-specific figure you give the guys Applied Culture – hands-on, without stopping to feed them information. Idioms do wonders. Let’s talk Mongol ones.

About the first thing you notice, when you come to the question of when to use them in your English-language novel, is how very usable they are. Figurative language in the Secret History to do with milk and its products, or to do with sheep and shepherds, has a lot of commonalities with us. Take a look at milk.

My titular example, I admit, might be construed two ways. Is that an insult – to have milk in your veins? Not in Mongol. Grown Mongol men drink milk, so you can’t walk into a bar and order milk with the success he had in Victor Victoria. “Is that cow’s milk, or mother’s?” “How about your sister’s?” Start fight. I doubt milk ever has negative connotations, while mother’s is mentioned like this: “You will not die of this wound. The flowers of the mountain with your mother’s milk will be salve for it.” [The Book of Dede Korkut]  “Thou speakest so as to harden the butter affection and so as to sour the milk heart of thy mother.” [Secret History #254]  Milk-for-blood means the milk of human kindness. I use butter heavily too: “Ogodoi is total butter,” says Temujin, or Toghrul says to him, “I am butter to you,” and the both of them to Jamuqa are “as soft as butter.” This cluster, in English, is the lovely obvious and makes direct sense to us. We can also make sense in Mongol. I can import from English: ‘butter wouldn’t melt in his mouth’, ‘butter up’ and other proverbs from the dairy. Spilt milk, the Milky Way. Like the foodstuffs, milk’s imagery is endlessly useful. (Do you know what number of foodstuffs made from milk there are in Mongolia? Neither do I).

Less edibly… “If one wrap them in green grass, they will not be eaten by an ox; if one wrap them in fat, they will not be eaten by a dog.” [Secret History #255]  Temujin said, or is reported to have said this, on the succession question, so it’s famous. I haven’t used this as often as I might, because in our language, it’s oddly insulting. An example of the over-expressive speech I’ve noticed, that in English is too strongly put. I found an opportunity when Jamuqa describes Nilqa – “Wrap him in fat, a dog wouldn’t lick him” – for there the insult’s fair enough. But Temujin’s talking about his descendants. He goes on: “will they not miss an elk breadthwise, a rat lengthwise?” – i.e., they couldn’t hit the side of a barn. But he doesn’t mean to be as insulting as that. The ‘wrapped in fresh grass’ is a well-attested saying, and Temujin is only speculating about useless heirs; the gratuitous sense it gives in English makes it hard to place. Mongols were outspoken.

In the origin legends at the start of the Secret History, that tell of the beginnings of things, Bodonjar seems to invent for the Mongols both falconry and government. “If a body hath a head, it is good; if a garment hath a collar, it is good… The people at the Tunggelig Stream are without a difference between big or little, bad or good, head or hoof. They are all equal. They are an easy people. Let us rob them.” [#33-34]  More or less. The commonest governmental metaphors are horse gear: bridles, halters, tethers – ‘horsey’ as Altan sighs. It’s a truth that the Mongols knew no word for power, political power, at this innocent stage, but they talked about it figuratively. – It was charged of them by a Chinese that they possess no word for peace. Temujin has his answer ready for my third book, and it’s a trenchant one, but here I’ll just say maybe so – because they talk figuratively about that too. There’s a phrase ‘the many days’ that I have translated ‘ordinary days, days in the main’: this means peaceful days. Which is a splendid answer in itself to the Chinese allegation, for the days without war were thought to be the normal days. How would you find that out, unless for the figurative language? They won’t sit down and tell you, ‘we thought of war as the exception’. It comes out in the idioms.

Hoelun uses hair to lament her first husband, “whose tuft hath never blown against the wind” – that is, the adverse winds of fortune have never blown back his Mongol-style forelock. But “now, tossing his two braids one time on his back, one time on his breast, one time forward, one time backward” – now he has a bumpy ride from fate. [#36]  See, you’ve just learnt about Mongol hairstyles, and it wasn’t like a lesson: that’s idiom.

Another famous one, “with fire in his/her eyes, with light in his/her face,” is nicely self-explanatory: the fire of spirit, the light of intelligence. Hoelun has “a heart bright like the sun, wide like a lake.” [#254]  Then there’s a physicality beyond where English goes. It’s usual to locate a promise in your internal organs: “Let my promise be in the back of my kidneys, in the diaphragm of my breast.” [#96 and elsewhere]  However, Urgunge Onon says this is mistranslated; the Chinese annotators mistook their bowels for kidneys; he gives, “Let my thoughts be in the depths of my bowels and in my backbone/in my ribcage.” Bowels can even be anus, he notes. [Onon, p.32-3]  Deal with it. Meanwhile “a stinking liver” means a bad disposition [Secret History #152] … that’s poor old Toghrul. My Jamuqa says Toghrul “stinks to high heaven,” in a semi-imitation of this – in fact I thought that phrase a lucky import, what with the Mongol heavens and the moral stench idea.

What about obscenity? Obscenities that wouldn’t have been written down? Nah. They used strong but not obscene language, or that’s the theory I’ve run with. I’ve backdated ear-witness reports that Mongolians were tame swearers – before the advent of television, of course. Their neighbours laugh at them for it. English obscenities I do use as a marker of influence from the big bad world outside. It’s true that John of Plano Carpini reports of the 1240s: “Their women are chaste, nor does one hear any mention among them of shameful behaviour on their part; some of them, however, in jest, make use of vile and disgusting language.” [Mission to Asia, p.15]  Unfortunately he can’t write down any samples, of what he considers disgusting, for a woman. Maybe they joked about their dildos. A Chinese in his memoirs tells us about them: a certain phallic root that enlarges itself with moisture…

Then there are the puzzles. Temujin has insulted Nilqa by a reference to Toqtoa the shaman and a fat-tailed sheep. Nobody knows what this means – it might rest on a proverb we’ve lost. I’ve made it a witticism of Temujin’s that fits my Nilqa and offends him direly.

Items of daily life: the ger (felt tent), the hearthfire. Destructive images: to dismember a door frame, to extinguish a hearth. These translate well, and the resonance in Mongol, where a hearthfire is sacred and a threshold mustn’t be trodden on, is quickly learnt. Carts and wagons: the cooperation of allies is always figured by two wheels, and Temujin’s leadership is symbolised by the big ger wagon that transports the home.

Homely metaphor around a few essentials: tents and hearths, carts and draught animals, milk and butter. This is the palette. I have made my Temujin a master at homely metaphor – with inspiration from the simple parables of Jesus. I’m proud to say I’ve never told you what constitutes a bow – I leave that to Temujin in simile. He’s talking about a son suspected dead:

“Why Ogodoi? When Jagatai fought Jochi for agha-rights Ogodoi was the fish glue. The glue between the horn that pushes and the sinew that pulls. The glue gets ignored, but you know, Ahai, up to half of a bow is glue. I suspect Ogodoi is the son I can least afford to lose.”

Temujin also tells you how to churn ayrag (fermented milk):

“My task is a joint labour and whereas Temujin is me, Tchingis is us. Mine is the sack, yours is the milk poured in; Tchingis is stood by the door with the churn in his neck and together we try to beat him a thousand times a day, and whenever we step in or out we lend a hand.”

If it’s strange for Temujin to draw an extended metaphor of himself as an ayrag sack, I take leave from the habits of the poetry, which to my mind is almost of the Metaphysical school. For instance, Blue Jos describes Tchingis, a bit bizarrely, and turns him upside-down:

In his hazards he tied his head behind him with his bags,
For safety from spillage he kept his blood in his flask.
With his sleeve for his cushion,
With his coat-skirts for his couch,
The flesh between his teeth he ate for supper
And swallowed his spit to slake his thirst.
In his efforts for us the sweat of his brow ran to his feet,
The sweat of the soles of his feet ran to his brow.

Those detachable body parts: figurative language is slipping into poetic tropes here, which I guess is another subject, but I have mused on them, through Temujin, as a poetry of war wounds. Body parts come off, except they go back on again – in the poetry.

At first I didn’t use the full verse above for my chapter epigraph – the sweaty soles were too odd for me and I left them out. Until I grew to love them. Again, it bothered me, in Jamuqa’s spontaneous poetry to the Naiman king, that he has a drooling falcon. Hang on. Falcons don’t drool, do they? Until I got it through my head, it’s poetry, you dolt. And a Mongol knows better than me. I’ll shut up and translate.

Let me end with a piece of Jamuqa’s spontaneous poetry (straight translation by me). These are Temujin’s dogs of war:

“My anda Temujin keeps four hounds to hunt for him in battle. Their brows are welded bronze, the whiskers of their muzzles iron spikes, their hearts are cast bells with great clappers, their tails cable whips. In the days of peace he ties them up with iron chains and the dew of the dawn nourishes them. On the day men slay and are slain they feast on the flesh of men. When enemy encounters enemy Temujin encourages his hounds with the quarry’s offal. See, he has unfettered them: those are his Four Hounds who chase your watch in cry; they are off the leash, they are jubilant, their jaws drip. Their names? They are Jelme and Zab, Jebe and Khubilai.” 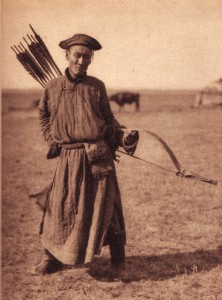 I’ve used the Francis W. Cleaves translation of The Secret History of the Mongols, available online: http://altaica.ru/shengl.htm  At times I’ve simplified it — mostly, I’ve taken out his brackets.

Urgunge Onon (translator), The Secret History of the Mongols: The Life and Times of Chinggis Khan, Curzon Press, 2001 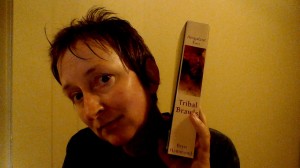 2 thoughts on “‘Milk in his veins’: Mongol slang”