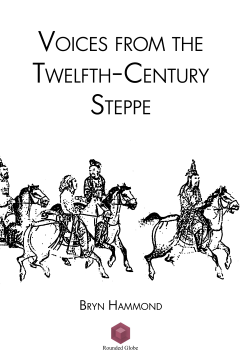 Today my digital book for Rounded Globe, Voices from the Twelfth-Century Steppe, is published. Available here.

There are two aspects to this essay. Chiefly, it is source criticism – a study of my primary source the Secret History of the Mongols – and on the side, it is a creative writer’s interactions with the body of secondary work on this source.

Academic historians may or may not be aware that outside of other historians and history students, they have a large readership among historical novelists. I’ve become conscious of this since I joined Goodreads: often I look up a history book and find its single review, or its most in-depth review, is from a novelist who engaged with it for her material. These reviews frequently enter into passionate conversation with the historian – as I know I do in the privacy of my home. Novelists rarely hide their investment in their subjects; although this need not mean we do not strive to be fair-minded.

Novelists, inevitably, have a different perspective on the source material (unless a historian moves along the spectrum towards a novelist’s position). We weigh things differently; we seek out things of less concern to historians. Or so I have found in my fifteen years spent with my primary source and the secondary work upon it. I began with no preconceptions (I had not thought about these issues); and at the end I know that my experience, which I write about in this essay, is a case study, that is, a single case, whose applicability to other cases I cannot guess at. Other novelists might nod along, see familiar trends, even an analogue. My source is a peculiar one in its own level of artistry (to an extent it is written ‘like an epic’). No doubt every source is a peculiar one, and every novelist’s engagement singular. I believe in the worth of case studies, and have simply written out my experience: the three-way conversation between source, novelist and historians.

On the specifics of the Secret History of the Mongols, I have reached a few conclusions which are not in the main history books, or the major commentary. I offer these as the arguments a novelist uses for her own purposes. Perhaps she does tend to interpret differently because she is a novelist: I do not say for certain; no doubt her ethos is different, probably her method. I am happy for the chance to make a few arguments, which otherwise I have only had the opportunity to put (persuasively or not – you be the judge) in fictional format, in my set of novels Amgalant. The original argument most likely to catch people’s interest, I imagine, has to do with Temujin’s own contributions to the Secret History: the idea that we have his memories, as he told them, and with this, we have insight into his psychology.

I owe great thanks to Simon Cook, co-founder of Rounded Globe. Firstly, for seeing worth in my Mongol novels; secondly, for seeing value in my account of how I came to write them, and commissioning this essay.