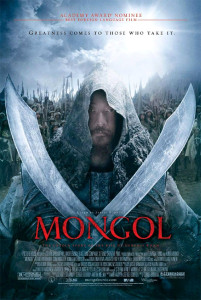 I walked into a cinema for this. I’m not a cinema-goer; in ‘recent’ years I’ve made the trip for Lord of the Rings, for The Weeping Camel, and for Mongol.

Perhaps that’s why – although I was thrilled to see Temudgin splattered on posters, although I enthused over the results – now I watch again, after a few years’ interval, I see I managed to underrate this film. I don’t have eyes for film.

Jamukha’s tremendous and steals the stage. I remember that’s what reviews said: Jamukha’s a scene-stealer and almost hauls the film out from under Temudgin. Which, of course, is just what he does in the Secret History: almost takes over the story, almost takes over the steppe. I can’t tear my eyes off him when he’s on screen, and that’s only right. Go Jamukha. 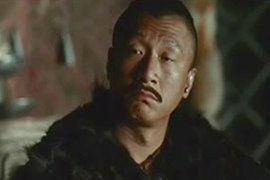 He wears such a different face to my Jamuqa that at first I was thrown. But that’s the beauty of him: he’s a gift to any fictionalist, a great anti-hero, and what you do with that potential is up to you. I only hate to see that potential wasted and him narrowed into a villain. 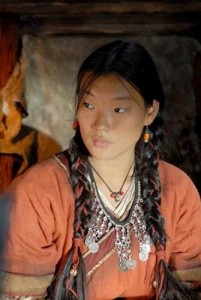 Borte. When I’m not transfixed by her face – and I am, so I miss what else is going on – she was a hit with the public too. Poor Temudgin, in between these two. He does great. That the film-maker spins his plot around the three of them is the strength, and exactly why the Secret History enchants a story-teller.

This film is the one fiction on Genghis that I like with a whole heart.

Onto Temudgin. Truth to tell, back then, his portrayal was why I was thrilled with the film. Now… I haven’t written for a year, perhaps I have objective eyes for these my characters with different faces. Now I see more and more Genghis in him. It isn’t just that Bodrov stitches his film together from phrases out of the Secret History and elsewhere (game with the subtitles: how infrequently the talk is mere invention). His Temudgin, to me, is a true portrait, exudes the right scent – I can believe in him. What I saw back then is how his sufferings and his simple fortitude under them – his child’s face in the plank-contraption, his man’s face in the cage – lends him a little of the saint. I think he needs an air of saintliness. Call to mind what a ferocious creature a saint is, before you get me wrong. Bodrov ends his childhood on a miracle: his imprisonment-planks falls off, in the open temple to Tengri, under the eye of the blue-grey wolf. The Secret History tells of miracles at this point, that the man himself believed in. 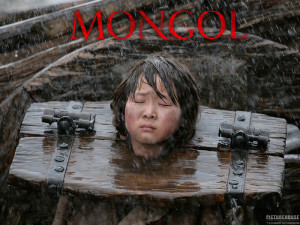 Captivity in Tangut? It’s one theory, and it’s film shorthand for the manner of wrongs the Mongols feel have been done them. It says well, in that expressive shorthand, what you might write a lot of pages on. I’d bet Bodrov has read his fellow Russian Lev Gumilev, who has a passionate page on these affronts, on the causes of war. He quotes a Chinese witness, Meng Hong, who wrote in 1221:

The head of the Jin exclaimed with alarm, ‘The Tatars will unfailingly be a cause of disturbance to our kingdom!’ Therefore, he gave orders for an immediate attack to be mounted against their remote and desert country. Every three years troops were sent to the north to exterminate and plunder; this was called ‘the reduction of slaves and extermination of people’. Even now they remember in China that for twenty years before this, in Shandong and Hebei, what home had not bought Tatar boys and girls into slavery? These had all been captured by the troops. Those who at the present time are grandees among the Tatars were then for the most part led off into captivity… the Tatars fled into the desert and vengeance entered their blood and brain.

Gumilev comments on this account: “It were better unsaid! What the Chinese scholar described recalls the hunt for Indian scalps organised by the Puritans of New England and the Baptists of Massachusetts, the slave trade of the French and English merchant venturers, the slaughter of the Patagonians undertaken by the Argentine government, i.e. pages of history branded as those most shameful for mankind.”

My guess is, Bodrov draws his history from this page. I thought Temudgin’s dialogue with Tangut, with that governor, with the monk, efficiently sums up much that you can say about his interactions with the settled states. 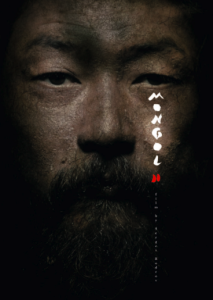 Bodrov’s only large invention is Borte’s rescue of him from Tangut, and I have excuses to make. It isn’t such a large invention: there were rescues from Tangut – Jaqa Gambu and/or Jaqa Gambu’s daughter. She can be a hero: women were very active participants in Tangut history for a century or two, with the nomad background and the example set by Liao. That she has a daughter unfathered by him, along with Jochi? Why not? He adopted several children from the enemy, a Tangut boy among them. Novelists, none of whom I’ll name, tend to decide it’s a better story if Genghis rejects Jochi. Maybe Bodrov felt the urge to state twice, ‘except he didn’t’.

By now, I know our luck to have this film. Think Genghis cinema, think what you’d expect. Instead we have this.

Lev Gumilev, Searches for an Imaginary Kingdom: The Legend of the Kingdom of Prester John, English translation by R.E.F. Smith, Cambridge University Press, 1987