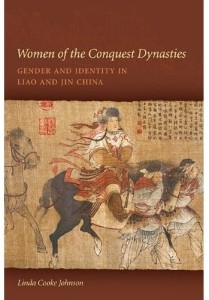 As a happy single these days, and even committed I think (that’d be a first) (enough about me) — I’m intrigued by the possibility that certain steppe societies allowed women to live singly.

Liao, at least. But Liao was an aspirational society for other nomad cultures, which seem to have found them fit to imitate. Almost the only information I have on this comes from Linda Cooke Johnson’s study of Liao and Jin women, Women of the Conquest Dynasties. She offers the example of Changge (1006-1077), a scholar and poet and member of the royal clan, on whom we have a biography in Liao records. “The entry specifically notes that Changge never married, and [her] epitaph mentions no husband, which suggests that marriage may not have been universal among Liao women.” [p.7]  Other than this, “The numbers of Liao tombs in which women are the sole occupants also suggest that other women may never have married.” [p.111-2]

It’s not much to go on. But Linda Cooke Johnson speculates that the Liao/Kitan custom whereby women married men of the generation beneath them may have led to singlehood. Women of the royal clan (that I like to call the Ile, instead of a Chinese transcription) were often significantly older than their husbands, but “the primary marriage pattern in which younger males married somewhat older women was common among both upper- and lower-class Kitans. Although Jin sources are less explicit, the Jurchen also evidently followed the generation-gap pattern in arranging marriages…” [p.99]  We’ll want to know at this point, sex before marriage was not a no-no. “Liao and Jin sources indicate that premarital permissiveness was a widespread and well-entrenched social custom…” [p.86]  We might feel that the unmarried were ‘left on the shelf’, but that’s our assumption, and this on girls’ sexuality reminds us not to make foreign assumptions.

In Mongol history, we have Qaidu’s daughter Qutulun (c.1260-1306) who tried not to marry, who wished to remain as her father’s right hand in war and politics. As I say, I believe Liao was a glamorous culture for other steppe societies, and I have to guess that Qutulun, to justify her life, cited Liao women, who before her had commanded troops — possibly she cited them on singlehood, too. That is, doesn’t the Liao information mean she needn’t have been pitted against society, to live thus? Still, Qutulun gave in to pressure, and to slander: she and her father were accused of incest, and after this she chose a husband — one of her father’s followers, which let her stay at her father’s side. I was a daddy’s girl too.

That incest accusation, a low blow, has an after-history in a Karakalpak epic, ‘Kyrk Kyz/Qiz’,  known in English as ‘Forty Maidens’. There, a brother and sister lead the fight against a Persian invasion. The enemy Persian Shah slanders them with incest to undo them. The brother, humiliated, leaves his troops and people, but they refuse to believe the accusation and choose the sister to head the army in his absence. Here I must see a memory of Qaidu and Qutulun. The latter’s legend as a war champion and army leader surely went towards the inspiration of this epic, which boasts more women under arms than an average plot of Xena.

I’m afraid that’s the end of my observations. I’ll keep digging, fascinated as I am, for single women on the steppe.

– Linda Cooke Johnson, Women of the Conquest Dynasties: Gender and Identity in Liao and Jin China, University of Hawai’i Press, 2011 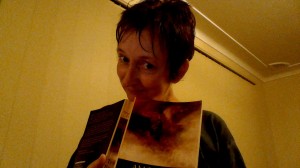