The things you learn in research.

1st story: Huang Chao, or the Mad Bandit (fairly factual nickname) captured Tang China’s capital with his huge army of the disaffected. He was a part and partisan of the anti-foreign swing in late Tang and had massacred 120,000 people in China’s most mercantile city with Indian, Arab and Persian residents. In the capital he was cut off with nothing to feed his army – except the inhabitants. For two years rations were human. In 883 Huang’s army killed more than a thousand people every day for food.  – Dieter Kuhn, The Age of Confucian Rule, where he goes on to quote a 14th century diarist: in the past and present rebellious soldiers have eaten human flesh. They called it ‘flesh of thought’ or ‘two-legged mutton’. Kuhn makes no bones about this habit: On many occasions when rebels ran out of food, they captured people and ate them; sometimes they salted or pickled the corpses to preserve them for later consumption. In years of famine, humans were slaughtered like livestock, chopped to pieces, and cooked for food. Human flesh was often more plentiful and cheaper than dog meat. 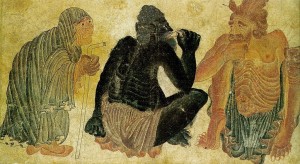 The bandit was mad, but what about the loyal general? He pre-dates the bandit, too, by a century; he operated in the great An Lushan revolt. Zhang had been so determined not to be starved out by rebels that he and his troops are said to have killed and eaten the entire noncombatant population of their besieged city, apparently amounting to twenty or thirty thousand people by the time the city fell. Zhang Xun had encouraged his troops to the necessity of this by first killing and eating his own concubine. In the aftermath of the revolt, the Tang government debated on whether to include him in its honours list of loyalists. Some Tang memorialists now questioned whether Zhang Xun’s behavior had not been excessive and suggested that surrender might have preserved more life. The emperor settled this question with an edict saying unequivocally that Zhang’s actions were undoubtedly meritorious. – Naomi Standen, Unbounded Loyalty. 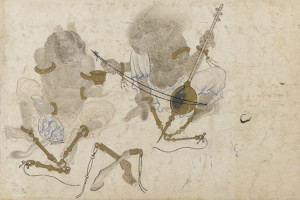 The third anecdote I’ve already written into my novel, so Jamuqa can tell us. It’s true, of course (would I lie to you?) and found in Don J. Wyatt’s article ‘Unsung Men of War’ – on psychology around war in Song, known as the most civilian of Chinese eras. There was a story [Jamuqa] loved, about a Chinese. “As cultured as any Chinese, a famous prose stylist, who held the office, at one stage of his career, of Assistant Facilitator of Propriety. It’s the sort of office Chinese have. Served with distinction in the wars against a tribal mountain people stuck in the midst of China, perpetual rebels. Every day he’d send his agents far and wide to scout for executions, and whenever they found a fresh cadaver on a gallows, they filched the liver. This organ, raw, he’d have put before him with salt and vinegar, as his own first course in an otherwise perfectly conventional dinner. To the shock, horror and nausea of colleagues and acquaintances who dined at his house. Now, who does this, I ask you? The mountain tribes? Maybe. Maybe they had a nibble on a liver. But this character, he just had to out-barbarian the barbarians.” — Against Walls, chapter 18

I’ll use the other stories in my next. Imagine what nomads made of these tales, these urban legends with substance – nomads who begin with an image of the ‘wicked city’. Jack Weatherford has given me a lead in his terrific little book Savages and Civilization. He points out that the early Bible is a unique document in the old tribal-urban antagonism: The Bible offers the best example of the perspective on the city held by rural and nomadic tribes. Unlike most ancient chronicles, which relate their stories from the heart of urban civilization… the Bible records the perspective of distinctly nomadic herding people. The tribal people may have been conquered but were seldom awed by urban life, but when they did succumb to urban pleasures, divine retribution… followed quickly. I now read my Bible with this thought and see its city-hatred. From Egypt to Babylon, the books of the Old Testament present a catalog of urban sins for which God is constantly sending angels, armies, famines, or plagues to punish one city after another... God destroys them and often the entire city with them, or else he gives it to a more virtuous people, who are usually nomadic tribes.

The customs depicted in the Sodom and Gomorrah story, let’s face it, are unlikely: a sexual toll on travellers, you can’t stay overnight unless you offer entertainment. But as a garbled, ignorant nomad’s legend – think of a nomad who hasn’t set foot in a city and is here warned not to – with lurid sex and offence against the nomad’s first principle, guest rights – Sodom and Gomorrah suddenly make sense. 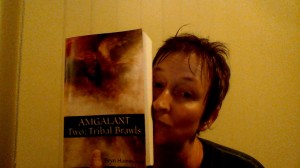 1 thought on “‘They eat people in the city’: three anecdotes”