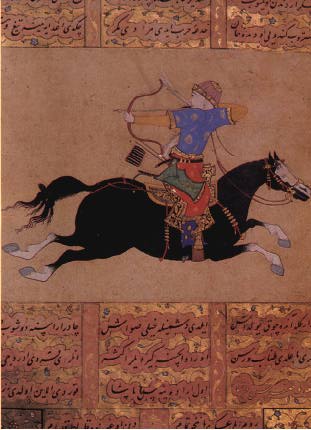 Mine does, “incorrigibly”. How radical is this in the field of Jamuqa studies? Who else has him so?

A couple of biographies at least contemplate the idea. Michel Hoang is convinced in his Genghis Khan, and if you forgive the archness of his presentation I’ll quote him.

From a section he titles ‘A Strange Friendship’: “Rarely has the chronicler of The Secret History spoken so effusively or at such length about love… Jamuqa was suspected by Temujin’s wife and mother of having ignored ‘proper manners and customs’. Is this to be understood as an allusion to the private habits of Jamuqa…? Did the ‘sworn brotherhood’ conceal some other intimacy? Like the Sinologue Arthur Waley, the Mongolist Paul Pelliot claims not to know the significance of the line, ‘they slept together under the same blanket.’ However, the clause ‘they loved each other’ repeated four times in just a few lines, lends weight to the theory that this was a special kind of friendship taken to its conclusion. One cannot speak with any certainty on this point… however, there is only one inference to be drawn.”

Qorchi’s dream, after Temujin and Jamuqa have quarrelled, “adds to the ambiguity surrounding the anti-hero, Jamuqa.” Hoang relates the dream, in which Jamuqa is symbolised by a cow who knocks her horn off and Temujin by a hornless bull, and asserts that it “does little to dispel the equivocal character of Jamuqa.” [pp.100-1]

I have to quote one other thing from Hoang. In a section titled ‘The Tragedy of Jamuqa’ he puts forth the opinion, “The story of this strange pair and its disturbing denouement might have inspired Shakespeare.” Amen. If only Shakespeare had got his hands on the Secret History of the Mongols. Hoang gets his teeth into it, the Jamuqa and Temujin bits, like an incipient novelist – and he even attributes to Jamuqa “incontrovertibly a greatness of soul”. [pp. 140-1] But this is a tangent, isn’t it, Jamuqa?

You just made sense that way, Jamuqa.

I do have a note on this, at the end of Imaginary Kings. Wherein I don’t offer much grounds but my gut feelings or a novelist’s logic (… ‘It’s just that he’s fascinated by Temujin his whole life and his life hung together that way, he came across that way to me, and he’s such an outsider, too.’…).  Another novelist, Pamela Sargent in Ruler of the Sky, has him in love with Temujin, although he’s Bad Jamuqa.

A second biography I want to quote has a more sensible tone. Doeke Eisma in Chinggis Qan and the Conquest of Eurasia concludes that Jamuqa was the major emotional involvement of Temujin’s life: “Jamuqa seems to have been the only person for whom Chinggis had strong personal feelings, much more intense than for his wives, or he may have kept them more private, so that they are hardly recorded. He clearly fell in love with Qulan and the only record of an intimate gesture is when he was glad to find Borte again after she was kidnapped by the Merkit. With Jamuqa things were different… There was in Jamuqa a mixture of love, jealousy and hatred… It is not clear to what extent homosexual love was also involved, but their relation certainly was tragic.”  [p.53]

Qulan I’ve named Ulun, Brown Usun’s daughter near the end of Imaginary Kings. Later he takes her with him on the Turkestan campaign, when Borte has to mind the home camp. Then, to be equal, he takes Yisui on his last campaign in Tangut.

On his wives, the above is better than what I’ve seen in several places: that he evinces no particular affection toward any one woman. How the heck would we know, is the first thing to ask. I’d say – against the above – the evidence is there for Borte. However, “with Jamuqa things were different,” in that the Secret History is drenched in emotional description. Most biographers take this with more or less of your cynical salt. But what the Secret History tries to tell you is, whether love or friendship, Jamuqa was the big emotion of his life. I think the cynical lenses lead us astray too often with old cultures, but… that’s getting into deep water. This is a short post.

The second biography quoted was self-published at Lulu and seems to have lost its availability. No ebook. It began as an annotated translation of Rene Grousset’s old Conqueror of the World, until the annotations took over. Rene Grousset certainly gives us a highly charged Temujin and Jamuqa (where both are great-hearted, quite often) – no mention of sexuality, but he too puts Jamuqa at the centre of Temujin’s life, and enters into the spirit of the text. I love his book.

Jamuqa, if I may invite you to comment? The last word is yours.

Can you do a post about my military genius?