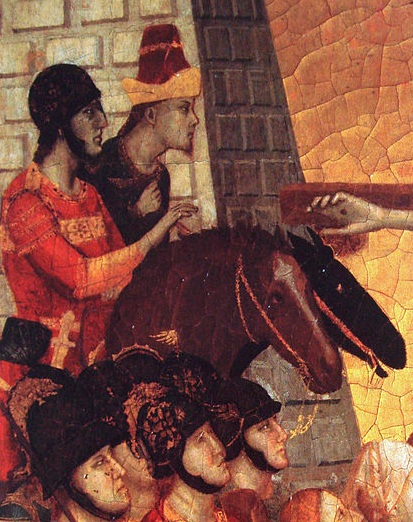 Giotto: a Mongol in a crucifixion scene, circa 1299

A homage to Rene Grousset, whose conception of Jenghiz Khan (as he spells him) was the first element of mine. It’s his Jenghiz I decided to write about. I remember that week I read the Jenghiz section of his Empire of the Steppes: halfway through his life I thought ‘I have my story, I have my hero’; from then on I was biting my fingernails, scared that in later years he’d alienate me – explicitly, I feared he’d be corrupted by power. When he was safely dead and had not lost my sympathies, I mopped my brow.

You see, I never got along with books, fiction or non-fiction, that are out of sympathy with their subject. Don’t misunderstand: give me a faulty hero. But without an essential sympathy, a writer has no hope to penetrate the subject. Ever and again I have found such books – hostile to what they write about – not only ungenerous and obtuse, but plain wrong. That’s why I’d have had to ditch Jenghiz as a subject had he done things I despised him for. The worst danger, as I say, I saw as abuses of power – the old story, turn on your own, murder old friends. When Jenghiz did not do these things, I admired him the more since I felt that to be rare. Uncorrupted by power; and add, uncorrupted by wealth. If I tell you unabashed he is my hero, these two boasts have much to do with it.

A tragic hero. I’m a tragedy addict; tragedy’s a dead art – George Steiner tells me so – to which I don’t aspire. But the tragic note in Grousset’s Jenghiz had to be there, or I’d have been bored with the story. And no other biographer has struck the tragic note. To me this is a failure: a failure of human sight, of imagination, and simply of nerve. Yes, I think Grousset is brave to face the contradictions, to grasp the nettle of paradox – take on the intellectual challenge. It’s easy to make him evil. The trouble is he wasn’t. He has nothing in common with Hitler and almost as little with Tamerlane. 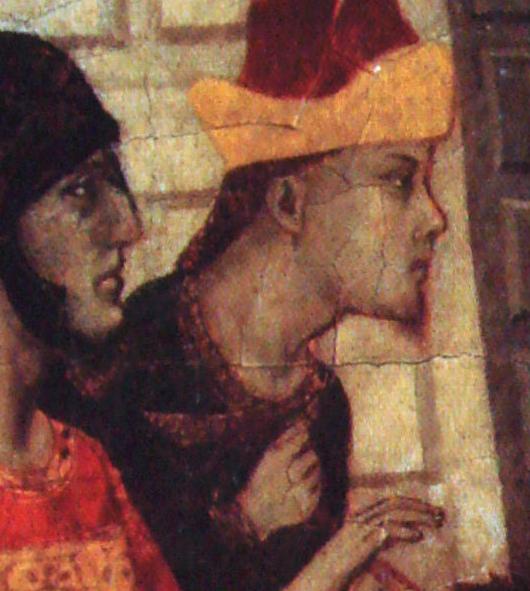 Rene Grousset was meant to be a novelist; to this fact I attribute his human understanding. On Jenghiz he’s at his most lyrical, and when I quote him you might laugh. Although if you want him at his novelistic best, he also did a popular life, Conqueror of the World, which has such evocative chapter titles as ‘Misery and Grandeur of the Nomads’, ‘The Tears of Chingis-khan’, ‘The Dogs of Chingis-khan eat Human Flesh’, ‘A Note of High Tragedy: Chingis-khan and Jamuqa’. I wish he’d just written us a novel.

So, what are my hero’s qualities in Grousset that, set against wars amongst the worst in history, make a tragedy of him? I can start with his famous quality of magnanimity. I have to joke about this word; I don’t know whether biographers catch it from each other, but no-one escapes talking about his magnanimity. It’s a fine thing, though ill-defined. Grousset sees a certain naivety in him, from start to finish. When he quotes his complaint to Toghrul (which I believe to be near to his actual words) he describes his “rough, naïve turn of speech” in this message that, as a quasi-legal statement, is half in poetry. (Contrary to rumour, Chinggis Khan was not a bad poet, on the strength of this and two or three verses of his own. Translations can be bad.) And he is honestly puzzled to be betrayed. These qualities sit alongside his loyalty: he ‘never flinched in loyalty’ to Toghrul in spite of the latter’s derelictions; ‘unswervingly loyal’, ‘consistently loyal’ says Grousset; and every service ever done him remained unforgotten, returned unto the end of his days.

One funny thing in Grousset is his treatment of the dignity I do not doubt our shepherd-king had: how he took in his stride the giant leap of his circumstances. “Being of noble lineage, he was in soul a king, and therefore less elated than anyone by his meteoric rise to fortune.” This dates Grousset to 1939, before we discovered the Chinggisid Revolution that was anti-clan and anti-aristocracy. Mind you, Grousset might turn out to be right; a recent book – David Sneath, The Headless State – argues there was no Chinggisid Revolution and the steppe throughout was strictly run by aristocracy. I’m not convinced, but it’s a gauntlet thrown down.

That had better do for his fine human qualities. Grousset, who has talked freely of his generous soul and lofty mind, now has to explain what happened when he met China and the cities of Turkestan. His answer is culture shock, the abysm between steppe and sown, inability to understand one another, sheer ignorance on both sides. Mongols were the ‘crudest’ of the peoples who galloped from the steppe, by which Grousset means, they had the least acquaintance with the settled world. There’s culture shock – there’s crowd shock, when you think about the demographic gap. I’ve had crowd shock in a city overseas, and I live in Sydney Australia. A nomad’s crowd shock cannot be imagined by us, but mustn’t be underestimated as a factor. Grousset looks to the shock, and it’s a start.

His solutions aren’t satisfactory, but he hasn’t shied from the challenge. Most biographers, because – in my eyes – they can’t get their heads around the contradiction, have instead to walk the cynical road. It’s the choice you get. Take Chinggis at face value, or put a cynical slant on everything he says and does. As can be guessed, biographers, in this day and age, who aren’t of the cynical party are very few. What’s taken for the standard biography, Paul Ratchnevsky’s Genghis Khan, is hopelessly confused because he can’t make up his mind on this fundamental question of stance.

For instance, shall we be cynical when Chinggis scruples to be the belligerent in a war? Even my Grousset can’t say this with a straight face. Attila (unlike Tamerlane) he sees as uncannily similar to Jenghiz, and in his Attila assessment he lists traits wherein he is akin to his later distant cousin; these include “an odd legalistic streak, which led him to seek diplomatic pretexts for his actions… so that he might at any rate be seen to have right on his side.” Every book I’ve read since, I swear, has an equivalent sentence, for Chinggis’ wars in China or Turkestan or in judgement of his career: ‘a strange quirk’, ‘a peculiar concern’ – I think I’ve even seen ‘quaint’.

Now, I quarrel with the need for an adjective. What’s odd, that his society has a concept of just war? I guess that’s only for civilized folk, for enlightened Europeans and ethical Chinese. Excuse my sarcasm. The steppe had a strong belief in God as the determiner of wars; Chinggis has to urge the justice of his cause when he asks for God’s aid; a perception of justice is going to be crucial – or God won’t help the troops. Chinggis kneels on his Sacred Mountain and tells his God, ‘I did not start this war. My cause is thus-and-thus; if you find us righteous, let us succeed.’ So, what? Is he insincere? Self-deceptive? He’s known for his piety, and within his culture as he is, for him not to believe what he says here is unlikely to the point of impossible. Still, what biographer can tell us this without a wink or a smirk or a tic at the eye?

I like the way Grousset puts the thing, when he gets to Jenghiz’ own chapter: Jenghiz had among his assets “the art of getting right on his side.” That’s perfect: it’s not cynical, but acknowledges that bystanders might be bemused at how he always manages to be in the right. That little phrase may have shaped whole swathes of my novel.

In general I think cynicism is a large mistake, towards people of the past. Nothing leads astray like the need to be cynical. It’s the blindest of tendencies. In non-fiction a lie, in fiction a dull story: I have no truck with cynicism. Its opposite I see as subtlety.

Rene Grousset, The Empire of the Steppes: A History of Central Asia, Rutgers University Press, 1970 (translation by Naomi Walford). First published in French 1939. 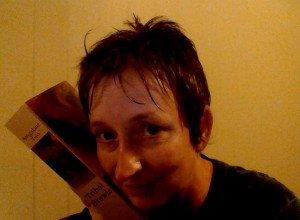