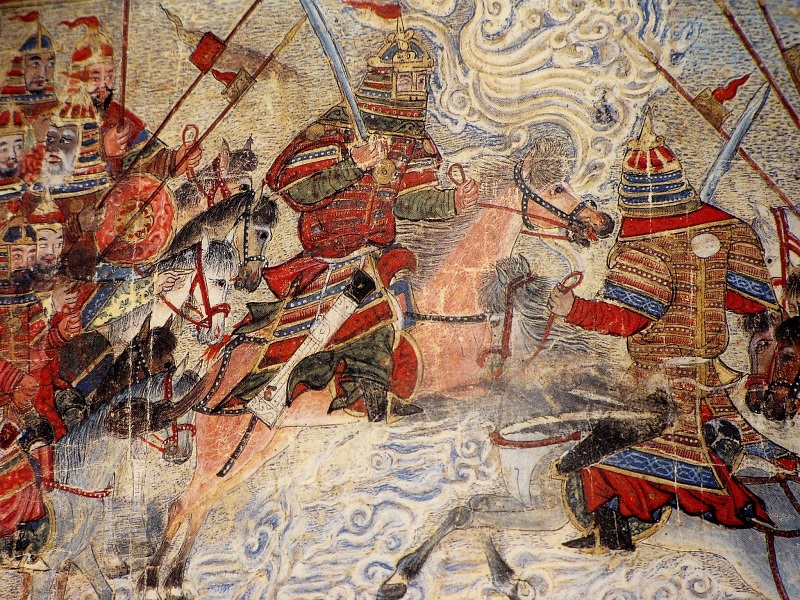 The moral of my story, and/or the method of my writing – it is both – from the start has been, that the 13th-century Mongols were ordinary human beings. People like you and me, in spite of my dedication to writing cultural difference. It’s rude even to say so in blunt terms: of course they were human beings, of course they were people. However, when it comes to the famous massacres, this axiom is not often the way we operate. The massacres, with the off-steppe conquests, I didn’t have to face as a writer until book Three, now underway. They were always ahead of me, and my preparation was to bring these people as close as possible to us (to me the writer and to you, the reader) – with a blind faith in the dictum of Terence:

Homo sum, humani nihil a me alienum puto.
I am human, and think nothing human alien to me.

I was not going to ‘other’ them before the conquests that we know of. I was going to do the contrary, and test out that Terence adage, in which I have believed devoutly.

That Terence adage is beloved of humanists and those who study the humanities: I see blog posts on it in these difficult times, by the above. I remember the English/History teacher who instilled it in me. Around the same time, Dostoyevsky was teaching me the same precept (Dostoyevsky? I’ll explain with this piece on his ‘radical empathy’, a phrase rather similar: Dostoyevky’s Empathy by Laurie Sheck, in the Paris Review). My teenage writing consisted of extravagant statements of this position – I tried to write great criminals from the inside (Dostoyevsky did).

And I end up, ripened as a writer and thirty years away from teenaged, with Genghis Khan. Who, before I researched greatly, was a big bogeyman, wasn’t he? And after research, he still committed those massacres. I have made you like and admire him, if you are with me thus far. We feel close to him. We’re in it together.

Over my life I have established rules for fiction. Or, I had them as teenager and they haven’t changed a jot; I can hope they have matured. Here’s a rule – probably The rule, I don’t have a big collection.

Rule One: Never write down. You can write up (still involve yourself, or risk unrealism). Never write a figure you feel is beneath you. Involve yourself, and if you can’t… your figure on the page isn’t a human being. Don’t decide to exhibit what you dislike in the world, in rationalist fashion, with tweezers and a scalpel. To be fair, in fiction, you have to be your victim; you can vivisect yourself, but nobody else, nobody whom you push to a distance. You can’t be fair that way, you can’t be true, you can’t write human beings.

That is my writing creed: there is no excuse for half-sympathy. If you have a villain, you must be that villain. It’s my (personal: I don’t say every other writer has to apply it) philosophy – no, I’d better stick with ‘creed’. Which is better than ‘rule’ too, since it’s mine and I allow that others think differently.

What if I’m writing about the worst person on the planet?

I don’t know. I’d say you need gigantic skills for that. Because your task remains the same. It sounds traumatic to me, who am not up to this. I have bitten off enough, haven’t I?

I have chosen Temujin, whom I like and admire and who committed massacres.

If you read a few heavyweight dudes on war such as John Keegan (A History of Warfare) and Azar Gat (War in Human Civilization), they are left sprawling about steppe warfare and make cultural explanations from a distance – speculating about why aliens do what they do. I am dissatisfied with these books, where I am not annoyed. Culture is important – too important for non-experts to offer general statements without in-depth cultural exploration. From memory (I need to refresh my memory on Gat) both hang an understanding on what is a popular ‘explanation’: the Mongols massacred the way they butchered animals. Inured to blood because they lived by heavy livestock and the hunt. This line, wherever I read it, assumes that the anthropology is the same as for a butcher in Yorkshire. It isn’t: if you say this, you must study Mongols and animals. Exhibit: Natasha Fijn, Living With Herds: Human-Animal Coexistence in Mongolia [Cambridge UP, 2011]:

‘Mongolian herders have a different perspective and attitude towards their herd animals compared with most views espoused in Western discourse… Mongolian herders’ attitude towards their herd animals is based on an animist perspective of the world, in which other beings are considered as persons… These belief practices are quite different from monotheistic beliefs that are based on the Old Testament.’ [19, 35, 47]

Everything about interaction with animals is unJudeo-Christian, Fijn explains.

Christopher Beckwith in Empires of the Silk Road [Princeton UP, 2009] has done much to un-other the steppe ‘barbarian’ on war. To him, the notion that the steppe way of life fitted them for war is a nonsense (why aren’t travelers’, anthropologists’ steppe populations bellicose, more bloody than the settled?). As a matter of fact I don’t go along with him altogether, but it is still a bravura performance of un-Othering.

One clarification. Genocide, a 20th-century word, has been applied to Mongol massacres, but (I thank God) in error or loose language, for genocide means to try to extinguish an ethnicity, a religious group or a race, and Mongol wars were never about ethnic cleansing. I don’t know how I’d have the heart to write about them if they were, but I have set myself sufficient challenges.

It is perhaps enough that I take Bo’orchu to the massacres in Turkestan.

My Bo’orchu, if you’ve met him, exemplifies the adjective ‘decent’. He has already, in emergency, practised a style of warfare that shocks a reverend old war chief, versed in traditional methods.

Because Tchingis Khan was an innovator in war. He was not a cultural machine who behaved as a steppe nomad is wont to do, when confronted with a city. He thought outside the square, and shocked his own.

My Bo’orchu has already reeled in horror at the sight of the Naiman army, then his enemy, in a corpse-pit on a scale he has never seen. We’ll have to find out how he feels when the corpses are more strange to him, in Turkestan.

I have spent my first two books, quite deliberately, making 13th-century Mongols as familiar as possible, Mongols ‘at home’, without insertion of escape factors for later on in the story (such as, ‘steppe culture was cruel. Life was cheap to them’). These excuses do not reconcile with views of the Mongols at home. And so they are every bit Terence’s homo sum: there is no way for you or I to think of them as Other, not by now. They have ethics, faith, humanity and everything we have. We can’t be let off the hook, I the writer or any readers out there.

I still have no idea how Bo’orchu is going to travel in Turkestan, to be honest in this blog. We’re not there yet. I have drafted in Temujin’s psychology, until the end. It might change. But Bo’orchu I suppose is my every-person, likeable and well-intentioned, not overly religious for his times and no great genius. I love him dearly, and, well, I’ll be there.

Image: an illustration to Juvaini, who recorded the massacres.