I haven’t before blogged book reviews, because that’s what Goodreads is for. But I might, now and then, with a novel relevant to me as a writer.

At the moment I’m sprawled at Julian Rathbone’s feet. What so excites me, I know, is certain nerves of kinship. I hasten to say he’s far more outrageous than me. But I’ll seat him here among my house-gods, who teach me how to write in the way I want to write. 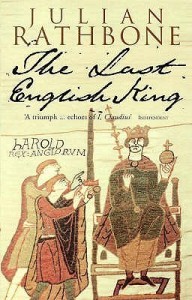 First: vividly written, feelingly, very high on ‘reality-sense’, atmosphere and peoplehood. With that, creative, unusual, and determined not to be your ordinary histfic. Also, fantastic writing. I didn’t skip once, through boredom with a description or thinking I know what the author’s going to tell me {or not until the idyll near the end. Right, I skipped once}. He knows how to craft a place-description so that even I, a poor visualiser, see. His description of people – and there I’m an aficionado – is super. He’s a student of gesture, an expert in body-language.

The early part is soaked in mood and the humanhood of Walt and Quint, whose journey together was the heart for me and knits the narrative: two odd travellers, cast out of life, in a way, in different ways. Their accidental friendship, very gently stated, is a joy. From there we look back on Walt’s past as a companion-in-arms to Harold, loser of the Battle of Hastings; while we travel to Constantinople and on through the Near East, see the world, the state of the world and discuss the future, too.

Walt’s nostalgia for Old (Anglo-Saxon) England is critiqued by Quint, and that nostalgia/critique goes on throughout the novel. I gave up English history years ago and had to brush up for this – not on the history so much as on perceptions of that history. Because I know he’s in a game with perceptions. The lines, I learn, are drawn thus: either England needed that vigorous Norman injection, or else England was an ideal place once, before the Normans came. I imagine that Julian Rathbone, being the sort of writer he is, addresses the historiography, the way history has been written, in ways that go over my head. If he deconstructs the characters of Edward the Confessor and William the Conqueror, I wouldn’t know – I don’t know what the image of them is. I can sense he’s engaging with interpretations of history but I’m not his audience there. I hear he upset people with his portrayals, and I’ll egg him on with that. In his author’s note he says William ‘saw to it that history was written the way he wanted it written’, and in the histories I know more about, I am only too aware that happens – and that propaganda then lasts down to the present day. Propaganda seems ineradicable, once in the record. I like his conscious tackling of our records of history. It’s a job historical fiction ought to do more often.

To this end he uses his anachronisms. He talks about them, too, in his author’s note: aside from the amusement, anachronism ‘serves a more serious purpose – to place the few years spanned by the book in a continuum which leads forward as well as back, to remind readers, especially English readers, that it was out of all this that we came.’ At commencement I thought that lame and wished he’d gone ahead and not tried to excuse himself. Later I started to see what he meant. After I’d read, for background, about 19thC heavyweight historians who have influenced our view of the Anglo-Saxons and the Normans. Because of that he’s not just writing about the 11th century. The anachronisms are often called arch, and I do laugh but if they were only for amusement I’d slam him. Quint quotes Yeats on Byzantium and what does that mean? That Yeats hit the nail on the head about Byzantium? I don’t know, but I enjoy the challenge to me, the ‘what does that mean?’

Edward the Confessor is a sad old soul. We first meet him as he faces the news he has six months to live, which helps our sympathy. He’s no hero and he’s no saint… they promise him sainthood, for political ends, and his kingship ends as his kingship began, used and abused. In the beginning, the thug of England Godwin set his ‘cock-quean’ son Tostig onto him, to entrammel him; after the Godwins change their policy and mangle that affair, he’s celibate for the rest of his life. As a king, even as a Norman-influenced king, he believes in non-interference: he sees that Anglo-Saxon England works. He is exhorted to make things more continental but he resists that pressure – even if he must enlist the Normans against the thuggish Godwins. I felt for Edward and he wasn’t such a bad old king. England blossoms under him.

Nostalgia seems to have won the argument by now and Anglo-Saxon England is/was a fairer, kinder, quieter place – even though its own politics has led to the crisis that lets the Normans in. The Witan is great, except the families in power determine what happens there. Harold knows he doesn’t need to be king – he runs England, like his father before him.

Nevertheless, after Harold visits the Normans, when he tries to tell the English what they have to lose – what Englishness is and won’t be – you believe in the urgency of his fight. When Walt tells the charcoal-burners, relicts of ancient inhabitants, who aren’t English, what their lives will be under the Normans. Will be, since we know the Normans win. What’s given as Norman is the later medieval system with its order, its suppression of disorder. Fair enough. Always thought I’d rather live in the 8th century than the 13th. A novelist takes sides, but – see beneath, for what the author has to say on that.

I like that he cares about societies before and after, that he cares what happened in history, even in 1066. If that’s writing with a political commitment, then – go ahead. Ancient fights for freedom, that lost and lost freedoms for us… there were others, and we need to care. If you care about your liberties now, let’s study the history.

William the Conqueror is Hitleresque. At first you think he’s a lampoon, but then Hitler looks like a lampoon. Soon the description is that of a serious psychopath. The word is used. Invented for him by Quint, who invents words, and Freudian psychology, such as I used to read about Hitler. So he was the Hitler of the day: how to get that across to us? Invoke Him, our equivalent. But Quint wants to talk about psychopathy, to us, across the distance, and he claims the right. He’s seen it. It’s just a matter of words. Perhaps Quint is a time-traveller. I’ll stop here as I’m rambling. I welcome his experiments.

Harold is decent but underdrawn. More might have been made of how he fits or doesn’t in his gangster family. Conveniently, the two brothers left to fight Hastings with him are also decent, much unlike the other brothers gone.

I read an interview with Julian Rathbone on the web – http://www.twbooks.co.uk/crimescene/Rathboneinterv.html  – where he argues for a self-conscious historical fiction that knows it has an ideology or an agenda. Because every historical fiction does. Better – more honest – for that not to be unconscious in the writer. Perfectly true. 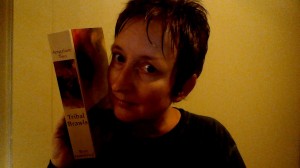