A miscellany on Mongol women. My topic in part one is the state of our ignorance about them. It was Socrates who said – more or less – your first step towards knowledge is to understand that you know nothing, and for the study of steppe women, I think he’s right. The false sense of knowledge is the danger; it means we’ve used a template familiar to us and assumed a similarity. So to start with, I want to talk about how much we don’t know.

An example is the difficulty I have in illustrating this post. I want primary source and it’s hard to get. For reconstructions, go to Zaya’s glorious gallery of Mongol queens and ladies. But where can I find images of steppe women from the time, and if I can’t, how can I know what they look like?

When Linda Cooke Johnson set out to study Jurchen women, she had a single rich image. In her book Women of the Conquest Dynasties she writes: “Jurchen tribal culture is best represented in the painting Wenji gui Han… Apart from the Wenji painting, most extant works of art reveal very little that is specific.” [57, 54]  Above and beneath is the painting; I’ll just have LCJ point you to the women and leave you to look at them: “Six women are shown in the painting: Wenji herself at the centre of the composition, two servants running beside her horse, a woman on the lead mare holding a flag, and two women among the group on horseback.” These last are centre-back in “round fur hats”. [57-8] 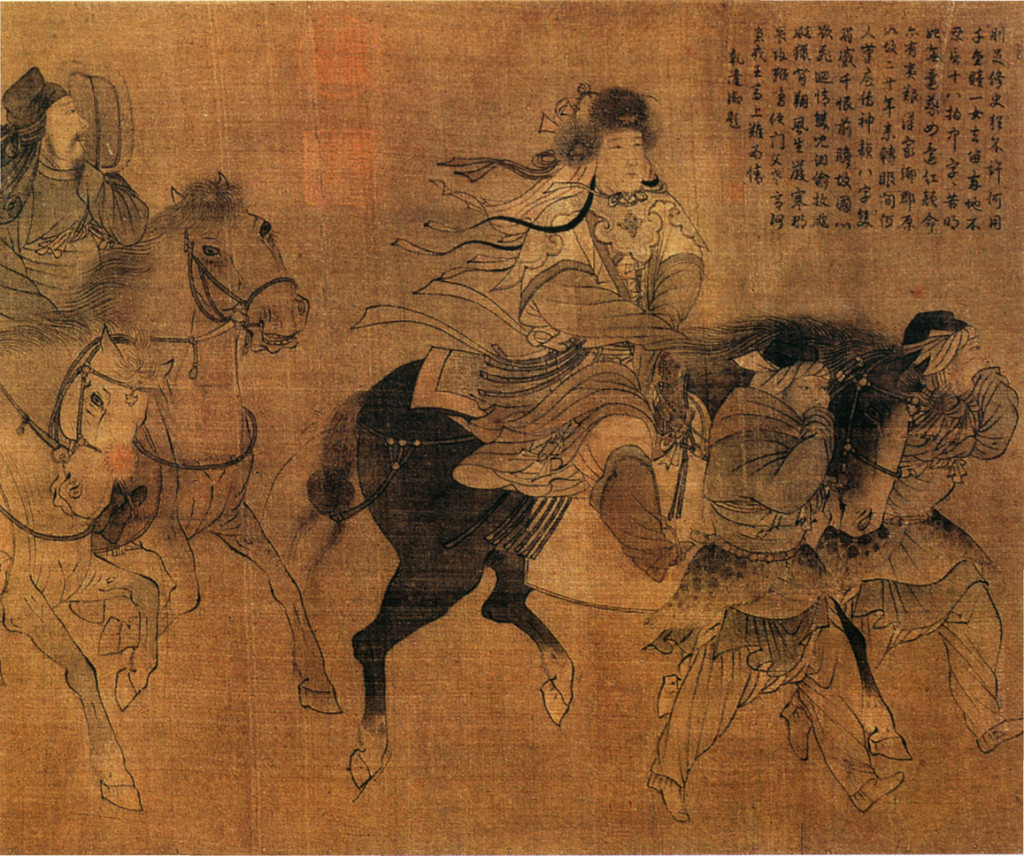 This is a painting on an ancient historical subject. Here’s how the Met Museum captions a Song dynasty painting of the same story:

Represented here are scenes from the life of Lady Wenji, who was abducted by a horde of marauding barbarians about A.D. 195 and spent twelve years among the Xiongnu, a Mongol tribe, as wife of their chieftain. She bore him two children before she was finally ransomed and returned to China. The Southern Song emperor Gaozong (r. 1127–62) probably ordered the story illustrated as a reminder of the capture of his kinfolk by the Jurched Jin. In this scroll, the costumes of the nomad invaders are those of the Khitan people, who established the Liao dynasty (907–1125) in northeastern China. To the early Southern Song viewer, Eighteen Songs, which presents a historical drama in contemporary details, did not represent a mere historical romance but a true, pervasive national trauma. — at MetMuseum.org

It’s interesting, then, how the Jurchen Jin portray this story (Jurchen are the tribal people who established the Jin dynasty when they conquered north China from the Song). The Jin painter dresses these third-century steppe people in Jurchen costume. Linda Cooke Johnson on this: “To the Jin court of the early thirteenth century, the civilized south was Jin China and the sheng (wild) Jurchen have become stand-ins for the ‘barbarians’ who abducted Wenji.” [59-60]  They view the story in the costume of their own tribal past: “To members of the sophisticated Jin court, these figures would have seemed bizarre, an aberration from the past.” [57]  A recent past – within the century.

As an aside, the ‘horde of marauding barbarians’ only has a name in Chinese transcription: Xiongnu. It’s not their name for themselves, which cannot be certainly recovered from its Chinese disguise. When people call them by the perhaps simplified name of Huns, it’s to acknowledge that Xiongnu is not their original name. If you like you can just call them a horde of marauding barbarians. See the entry on them at Iranica Online, with discussion of the Xiongnu/Hun name.

LCJ has this note on the art she consults: “Because of questions of authenticity and interpretation, I am not making use of paintings depicting pastoralist life that are attributed to Song or later artists… I have previously identified the Kitan tribesmen depicted in [Eighteen Songs of a Nomad Flute – the Song painting of Wenji in the Met Museum, above] as ‘generic versions of barbarians’ because they are all dressed alike…” [190]  Chinese illustration of steppe life can often be classed as exotica. So the only authentic painting she has is from Jin, who at least depict their own old dress-style with antiquarian accuracy.

And as for me – who’d like to give you Mongol women on the steppe, as they lived before the Mongols conquered China – I have nothing for you. To quote LCJ, for the last time, “Liao and Jin women may not have been as unusual as the Liaoshi  [the Chinese history of the dynasty] claims. Liao, Mongol and Jin women alike drew their strength from steppe traditions. To make a firmer case, however, we need to know more about women in steppe society beyond the frontiers of China.” [139]  And we don’t. It’s important to know we don’t.

To that end I’ll also quote a statement by Bruno De Nicola, whose research has specialised in Mongol women. From the abstract of a seminar paper:

This paper is a section of a bigger project that seeks to analyse the status of Mongol women throughout the Mongol Empire. The main objective is to ‘incorporate’ the history of these women into the general history of the Mongols by looking at the role played by them in different aspects of medieval Mongol society… Mongol women should not be taken as anecdotic agents or placed at the margins of history; rather they are a constitutive element of pre and post Chinggiskhanid Mongolia. Understanding the role played by these women will allow a more comprehensive approach to the social history of the medieval Mongols and their interactions with the societies that later came under their domain. – this abstract on academic.edu

In other words there’s much more to do. We need to keep in mind that the above hasn’t been done yet. Socrates was right: acknowledgement of our ignorance is where to start – we can go forward from there.

Women in the Ilkhanlig are getting attention (another note on names: I prefer to say khanlig instead of khanate, which is an ugly amalgam of Latin onto Altaic. Let’s stay Altaic). Bruno De Nicola, just quoted, has a book in preparation on khatuns (ladies/queens) in the Ilkhanlig. A study by Yoni Brack, ‘A Mongol Princess Making hajj: The Biography of El Qutlugh Daughter of Abagha Ilkhan’, [on academic.edu]  retrieves the life and doings of a Chinggis great-great-granddaughter from a Mamluk biographical dictionary, where she rates an entry because she was the first notable from the Ilkhanlig to travel into Mamluk territory on hajj. This is a piece of luck, as al-Safadi records more detail on her than we have from Ilkhanid sources. Here are excerpts:

She was the aunt of Ghazan and Kharbanda  [Oljeitu Ilkhan]. Among the Mongols, she was greatly respected, often referred to, highly revered and her words were valued and appreciated. She was sharp-minded and skilled in furusiyyah [the knightly arts, centred on horsemanship]. She was married to Urab Ti  [Ghurbati]… When her husband died, she rode on her own and killed his killer, beheaded him and hanged his head on the collar of her horse. It stayed there for a long time until she was approached about it and she then got rid of it. Some say that she only got rid of it when instructed by a royal decree. She never married again after Urab Ti.

Then she comes on pilgrimage, in the year 1323, when she is estimated to be in her fifties:

The judge Shihab al-Dın Ahmad b. Fadl Allah said: ‘I was undertaking the hajj that same year and I saw that she was a woman deemed worthy among men for her resoluteness, decisiveness and honour. She had on her the expression of greatness and the gracefulness of majesty. She gave great sums of money to charity and it is said that she gave to charity in the two holy places thirty thousand dinars. She travelled the way on a palanquin and rode a horse, the quiver fastened to her waist and the parasol raised above her. She led ring hunts and hunted all along the way. She was greatly respected for countless good deeds. When she arrived at Damascus, the commander Sayf al-Dın Tankiz went out to meet her and he treated her with most kindness and honour so she entered Damascus without a parasol over her head.’  [parasol etiquette was different in the two states]

Yoni Brack’s study of this biography suggests that her vengeance for her husband may have been execution-style — for injured parties were allowed to perform an execution — and compares it to the vengeance recorded of a Chinggis daughter in Juvaini: she went into the reduced city of Nishapur and slew widely, after her husband had been killed in the fighting. That leads me to the question: how often were Mongol women present at the fighting? We don’t know. This Chinggis daughter is mentioned because of the incident at Nishapur – Juvaini hasn’t told us before that she was on campaign. Who else was on campaign, but didn’t happen to earn an anecdote in the histories? We don’t know. At battles in the Ilkhanlig – again my source is papers by Bruno De Nicola – high-status, high-profile women are mentioned as present. But do they rate a mention because they are Chinggisids? Or, were only Chinggisid women present? Unknown.

I’ll end with a celebration of life in the Ilkhanlig. This time I’m not going to predispose your mind with comment, even to point out the women. I wish I had found more images online, for there are other exhibits in The Legacy of Genghis Khan: Courtly Art and Culture in Western Asia, 1256 – 1353.

In part two of this miscellany, we’ll visit the world of celluloid from Inner Mongolia; the complaint of a Mongolian princess in a 1935 newspaper; and ‘Monstrous Mongols’ – androgyny in European depictions of the Mongol Other. 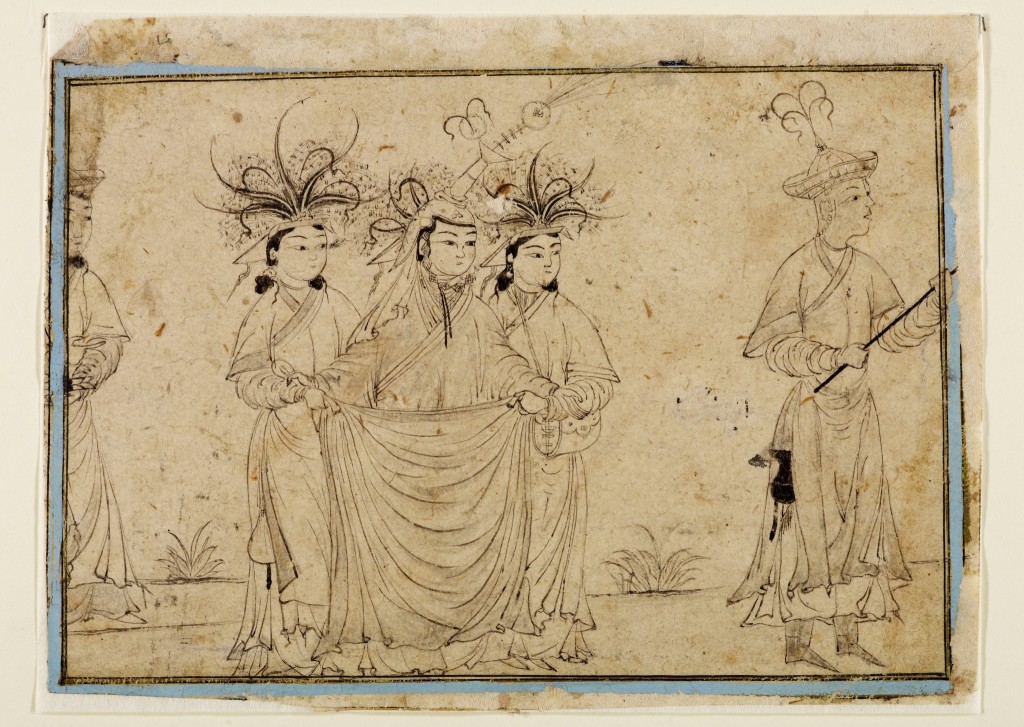 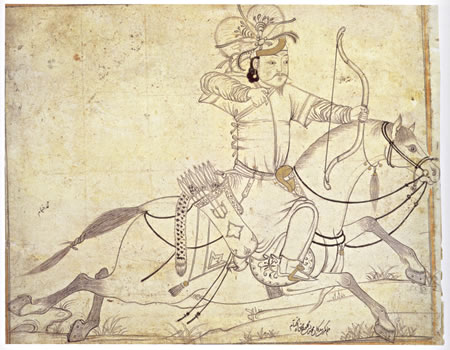 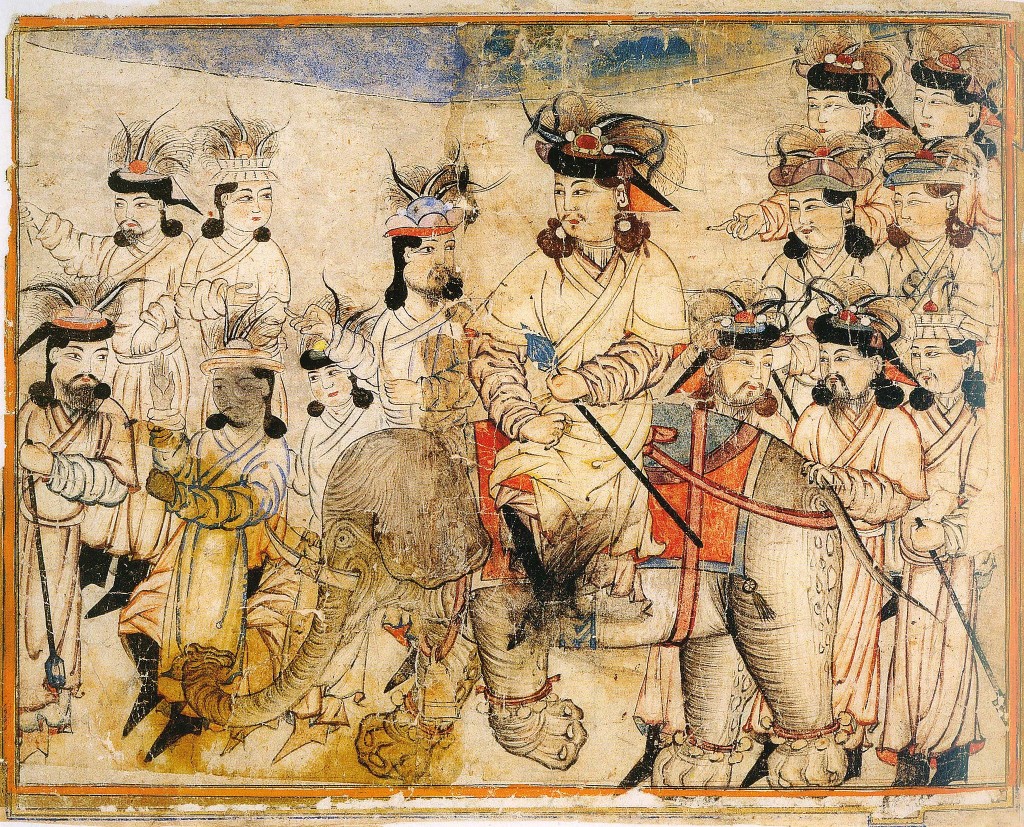 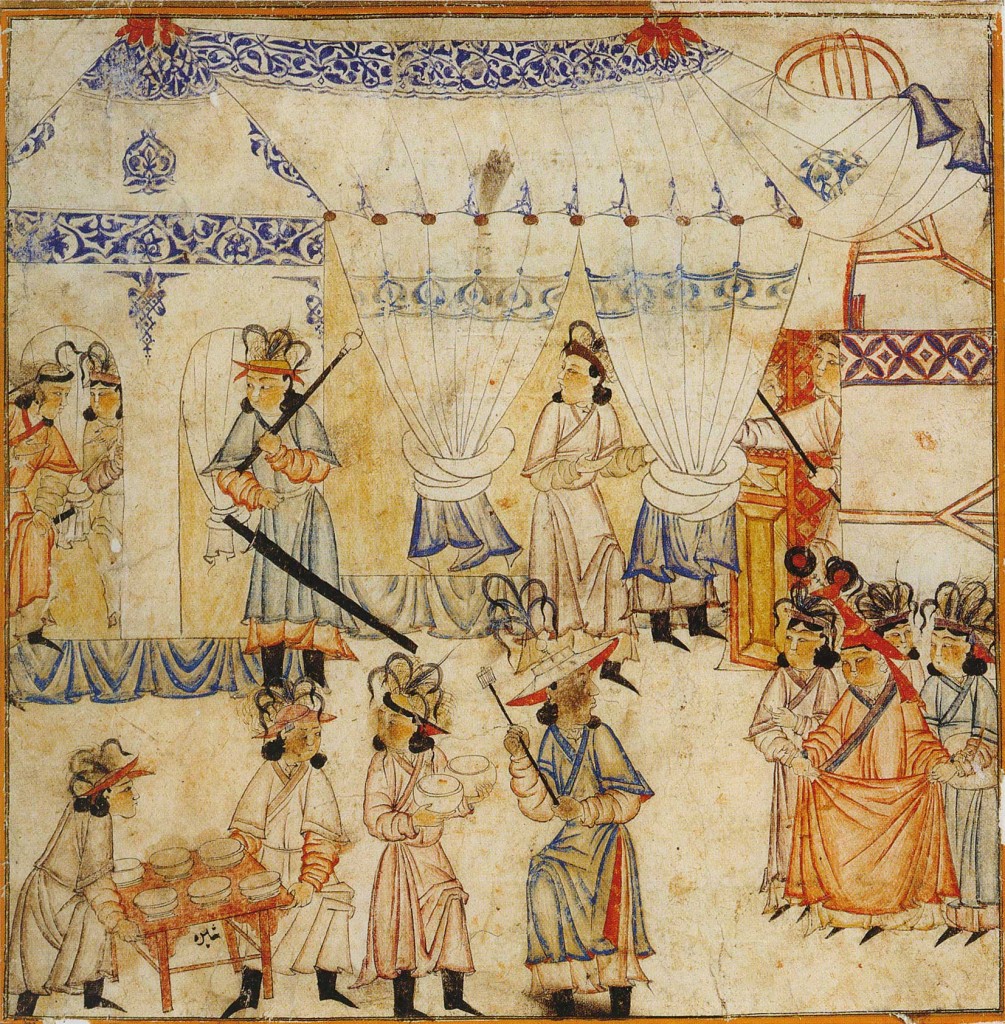