On the very split personality of our most famous Mongol. For years past I have believed that there can’t be another historical figure with such opposite images… can there? Since I only know bits & pieces of history I haven’t claimed this to be so, but a few pages by Timothy May on ‘Mongol Image’, in his book The Mongol Conquests in World History, have kicked off this post. May’s pages display plainly his split image.

He divides them on the names: after running through “the most innocuous forms of popular entertainment, from movies to comic books,” to see the sheerly casual use of the Mongols to stand for evils and worst-case events, he concludes, “the G-Word or Genghis Khan appears to be the avatar of this image, while Chinggis Khan is the historical figure.” [102]  Let’s footnote that ‘Genghis’ can be insisted upon by publishers, on the grounds that the general public doesn’t know who Chinggis is (John Man says his did, and John Man’s book falls on the Chinggis side).

It’s not a matter of popular culture versus scholarly history – not in the least. But I’ll linger for a moment on the popular culture. The Mongols, and Genghis in particular, are at saturation-level on the internet, television, in casual talk. Last week on QI the honourable Stephen Fry gave us twaddle about Chinggis – a little barb in my thin skin, as it always is. For a Mongol researcher like me, it’s dangerous to turn on the internet. The amount of off-the-cuff, casual – I’m going to use that word a few times – use & abuse of Mongol history, and Chinggis in particular, has got to be beneath the internet’s usual standards… hasn’t it?

Timothy May’s book, just yesterday, told me that yes, the Mongols (and Chinggis in particular) are a stand-out case. It has told me that the stigma and infamy are, indeed, unexampled. “Certainly the Vandals garnered some recognition,” but they don’t have the Mongols Motorcycle Club, rival to Hells Angels. [103]  As a teacher of world history, he ought to know, and he has told me this much in a scholarly book, and I am going to try to explain the effect on me. However weird this post turns out. You see, historians rarely look at the popular culture – as if there is a partition and they needn’t be concerned – and so, I haven’t seen this situation described in an (ahem) legitimate source. And you know what? I feel legitimated – in the emotions I have had, as a Mongol researcher. I feel like I’ve been a secret alcoholic and now I’m standing up and talking about it, because a person has given me permission. I have been given permission to feel what I felt. Therefore, you’re going to hear about it. I promise not to be too splashy-emotional, and Timothy May is in no way to blame for the content of this post. He only wrote a few pages on ‘Mongol Image’.

As I said above, it isn’t only popular culture. If it were, we’d fix it in no time, for there isn’t a partition, there’s a… zone… and I live in that zone. It isn’t as simple, either, as that old scholarship = negative towards Mongols, new scholarship = more enlightened. Rene Grousset (1939), Michael Prawdin (1935), even Henry Hoyle Howorth (1876–1888), can give you more sympathy towards Chinggis and his Mongols than you might find in a recent biography. In fact without Rene Grousset… this post is a sort of sequel to one on Grousset’s tragic Jenghiz Khan, where I talk about the inception of my novel and complain about scholarly portraits of Chinggis, so I needn’t do that here. Today I just want to describe my experience.

The bad cop Genghis input – not only when I ventured onto the internet, but in the privacy of my library of academic books – barraged me for years. I felt mentally battered and besieged, by my own books. That good cop/bad cop routine is meant to discombobulate you, right? It did me. I’m not natively thick-skinned… I tried to grow elephant hide on the Mongols’ behalf, and not be a wuss or make a fuss. I used to feel sorry for myself, in a quiet, hangdog, hunched-up way, and I had to wonder, do other researchers cop this flak? Flak’s the word for it: random, violent, senseless, everywhere. Misery wants company, and I sniffed about for others with misunderstood pet subjects… there were the Richard III Rehabilitation Society people, perhaps they suffered a bit too? But not like me. This was in the days before Jack Weatherford published. When his Genghis came out, in 2004, I reacted like a starved prisoner dragged suddenly in front of a banquet: you can’t eat it, you can’t digest it, you half-hate the sight of it. I went into a strange mental reel, because I was in an unhealthy state, head huddled in my arms against the blows of my library books. Things have climbed from there, I stride the world with confidence, I don’t cringe at the mention of Genghis…

See, Timothy May told me yesterday that the Mongols — and Chinggis in particular — are an exceptional case, that the casual, saturation-level vilifications go beyond what researchers on other subjects have to face. I had a reason for my self-pity. It feels good, I feel liberated to talk about it. 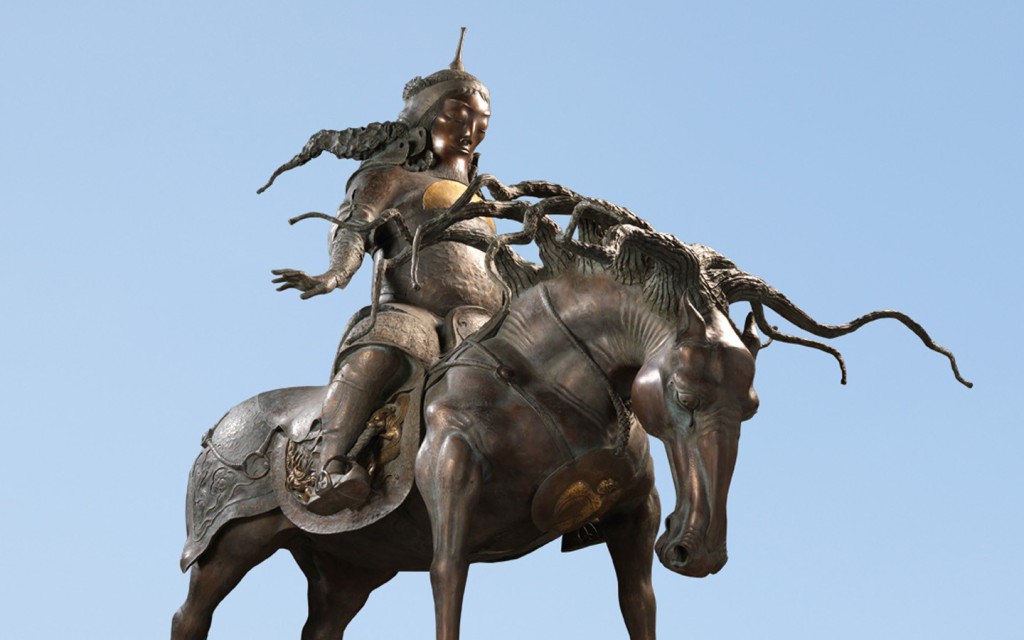 Of course, his other image lives in Mongolia, largely. Very largely – have you seen the size of the statues? As May says, as has been said before, at home he’s a King Arthur equivalent, but elsewhere he’s a Hitler. These two collided with the installation of Dashi Namdakov’s sculpture at Marble Arch in London (pictured). You can see this is an inspirational, spiritual image, Genghis as “thinker” as Dashi said to the papers. Quote a councillor: “To erect a statue of Genghis Khan at Marble Arch is a bizarre decision… Who’s next? Stalin? Pol Pot? Saddam Hussein?” Here’s the story in the London Evening Standard. If that comment were unusual… but it isn’t, it’s absolutely standard. Genghis is so often bracketed with Hitler that a phrase has come into use, ‘to the right of Genghis Khan’. I can only explain the etymology of this by assimilation: Genghis & Hitler = killed a lot of people: Hitler & Genghis = extreme right-wing. The senselessness. Timothy May has an online post about that phrase: To the Left of Chinggis Khan. Hey, I used that title… I hadn’t met his when I did. Irritated minds think alike.

I wish May’s discussion of image had covered fiction. He talks film, from John Wayne to Sergei Bodrov’s Mongol. That latter was a healing event for me: Genghis in the cinemas, and the most sympathetic fictional portrait in existence… outside of Mongolia. I have seen three or four Mongolian-made historical films on/with Chinggis, and of course they have far more of King Arthur than of Hitler. Hitler doesn’t enter. It helps to understand – as Timothy May iterates – that Mongolians remember him for his internal activities, not so much his external wars. It’s like the Secret History, where the off-steppe conquests are the least important thing he did. I’d kill (oops) to have Mongolian fiction on Chinggis translated and widely disseminated. Novels are better than movies. I believe it’s fair to say that our novel-reading public expects and wants bad-Genghis, and that’s almost always what they get. Historical fiction is allowed to fictionalise. It isn’t written to salvage his reputation. It does affect the view of him in the streets. Example: in nine out of ten Genghis novels (I have a little collection) he rejects or is estranged from his son Jochi because of Jochi’s bastardy. For the sake of a story, although we have Jochi’s own word for it that Chinggis accepted him as a son. When we rob him of documented good deeds, he hasn’t got a hope. I cheered when Bodrov’s Mongol has him embrace two bastard kids (he adopted several enemy children — they have an excuse to make it two). A Japanese novel, The Blue Wolf, hangs its theme and story on his rejection of the bastard, and has him psychotic at the age of eight. A French Blue Wolf tells the story this way: “But soon, his hunger for power becomes increasingly violent and leads him to experience overwhelming paranoia and a growing mistrust of old friends and allies…” (perilously, I quote the blurb – never believe a blurb, but I have the book for back-up). As I say in my Grousset post, see above, what I admire Temujin for is exactly that this didn’t happen. However, the negative image in fiction is changing too: Chinggis isn’t bad cop in Tom Shanley’s, while Elizabeth Bear has historical fantasy where Mongols are simply human beings.

I’m going to wind up this post, that has been a catharsis for me. Thanks for listening.