Hey, he says in his question session, “There’s nothing objective about anything I say” — so why do I have to put an objective title up there?

The wonderful Jack Weatherford stands on a stage at Embry-Riddle Aeronautical University, in February this year, and talks about Genghis Khan. His focus: “who he was as a person.”

Or to quote my own Bultachu Ba’atur, as he tries to talk his wife into softening on Temujin; he points to the figures-become-legends in the epics: ‘The legend, he’s described to curl your hair, he’s the bristly brindled blue-maned wolf, he glares red when he’s roused. Beneath that once was a person. What he was like?’

Jack’s a story-teller as he gives you excerpts from the Secret History of the Mongols. The start Temujin had in life. If you ever doubted Temujin is one of the astounding people in history, let Jack lay out the facts for you.

And what an odd army he had, with which to achieve things no-one else has. Hung together on loyalty and talent — not aristocracy, not kinship. His generals weren’t the steppe aristocrats but poor herders, who never betrayed him. Kin betrayed him and he did not use kinship but found or created other loyalties. Loyalty is his most important word. Army communications? — in verse. Of course, in an oral society, where people can talk in verse, the way fish swim. He built bridges. He built nothing else — no fortresses, palaces, temples, these were alien to him and remained so. But bridges, by the hundred. He was a practical man.

The statecraft to be learnt from the great Chosroes of old and what is written on the arts of war and method of government of the Pharoahs and the Caesars was by Tchingis Khan gleaned from the book of his own mind, without records for instruction or the trouble of traditions to observe, but self-taught by the light of the intelligence God gave him: and as for his intelligence and his ingenuity, Alexander, of the curious mind, might have been his student in contrivances for the seige of castles and in how to conquer… To his own conceptions, then, he framed the Jasaq.

The Jasaq is his law code. When the Mongolian government — freed from the Soviets, under whom you weren’t allowed to mention Genghis on the streets — planned its first official statue of him, to preside over the parliament, they took for a model that of Abraham Lincoln: not a conqueror on a horse but a lawgiver. It’s how he’s seen at home. 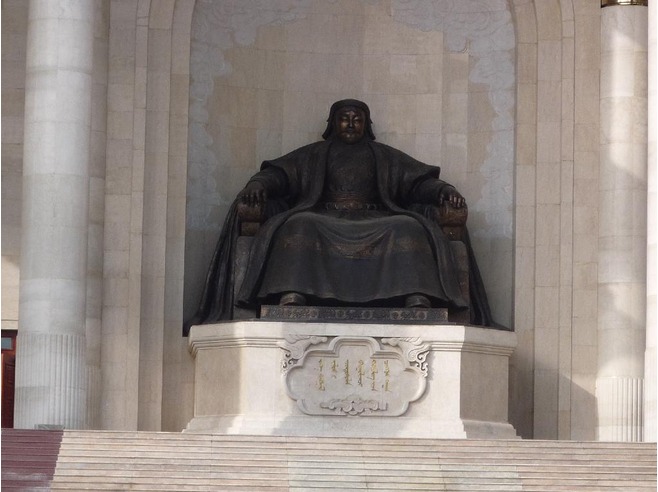 What sort of government did he run, himself? His government began as an army, yes, and as a distribution machine. This is a man who, fairly certainly, “accumulated more wealth than any person in the history of the world: he didn’t keep it. It went out — it went out. The first people to get a share were war widows and orphans.”

But Jack talks about a dereliction of principles, late in his life. Not a violation but… a retreat from his old principles of ability and loyalty as the only factors that matter. He too succumbed to kinship above these, undone by his love for his sons, and left the government to them. I like how Jack criticises this. It didn’t work out, it had bad consequences, and is a shame, yes. Our Temujin’s only human. Jack tells you the tragedy of Jochi, his first son, who wasn’t fathered by him, but the one Temujin loved most.

Then there’s half an hour of question time. He’s asked about The Secret History of the Mongols. Jacks stresses its intimacy: conversations he had in bed at night with his wife, are reported. This isn’t a public document to honour a public figure — hence the ‘secret’.

Ethics in war? “In warfare I think he was scrupulous… He was a practical man. But a very ethical man.”

He is asked about rape, Genghis Khan and rape. Yes, I’ve seen on the internet he’s the greatest rapist in the world. Never mind evidence, assumption is enough. Jack says: “I know of no documented case where this happened.” He explains a little about how “the whole (Mongol) masculinity is so different from ours.” With wives commonly older than the husband. “Steppe culture in general — rape was not a part of it.” He distinguishes from the kidnapping of women, in tribal life. As I do — it’s quite a different thing. So different, that I have not used the word ‘rape’ — our word rape — in the story of either his kidnapped mother or his kidnapped wife. As soon as I do, modern ideas intrude, and so I don’t. Rape in his wars? “To my knowledge it did not happen.” He wants evidence, see, and they can’t bring him any. As for me, I haven’t got there yet; I’m still in 1206.

I won’t always tally with Jack Weatherford, in my portrait. His Genghis Khan and the Making of the Modern World came out when I was a couple of years into work on mine — and I was over the moon at such a sympathetic portrait, in a popular history, for a wide audience. But I felt dead lucky, too, that I’d had time with my Tchingis before Jack, BJW, because that’s an Anxiety of Influence I might never have escaped.

Jack Weatherford turns out to be a great talker, if you ask me, and you did since you’re here. If you have a spare hour and a quarter… put it on while you’re knitting, and listen to Jack.

# # #
Jack Weatherford is the author of Genghis Khan and the Making of the Modern World and The Secret History of the Mongol Queens. Here’s his author page on Goodreads.

Don’t miss The UB Post on Walker Pearce, where I link to a feature on his wife from an English-language newspaper in Mongolia. Jack gets a look-in.