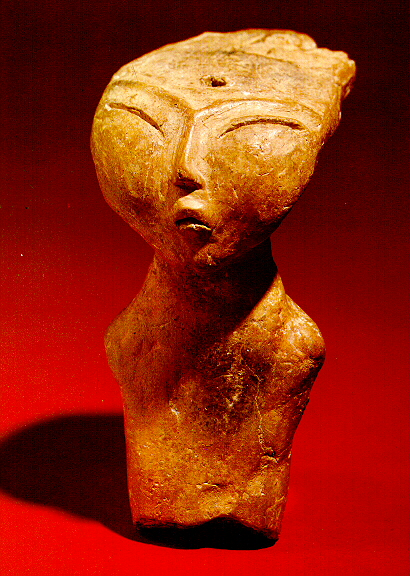 So they like to call her. She’s from the Stone Age on the Amur River, and I’ll take her over Nefertiti.

She’s in an online gallery called Faces of the Amur. Named for a strong tradition, as old as we go, in human masks, abstract faces and portraits, as petroglyphs and clay figures. A while ago I posted on Liao tomb masks (I think I used the phrase: Tutankhamun, eat your heart out  — or did I only tweet that?) where I said we know nothing about them, we can only guess at significance and context. These age-old human faces of the Ussuri and the Amur must help with context. The exhibition’s text, found on this page, stresses the continuity of culture, from archaeologists’ finds to ethnographic evidence — what’s in museums from the 19th and early 20th centuries.

There’s a book to go with this exhibition, that I own, but I think you get the full text online, and most of the images. I have to say, though, the big photo in the book makes our Nefertiti’s case more convincingly. She’s lovely, exudes ‘real woman’, and was the first human figure they found in Neolithic excavations on the Amur.