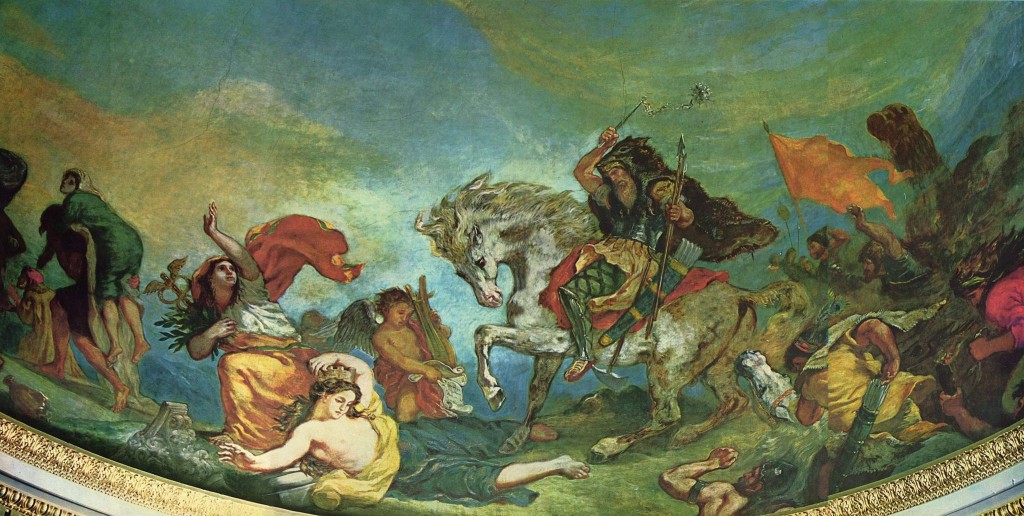 You cannot research through enemy eyes. Self-evident? I don’t know…

I’m resolved to name no names in this post. It isn’t fair to – the problem seems so common. Later I might single out one very famous author, since what I have to say can’t leave a scratch on him. I think I need one example.

What I have to say is self-explanatory, and self-evident too, and yet the urge to write this post has grown upon me, as I see what I think are examples of this one-sidedness in historical fiction. Books that are one-eyed on a conflict of the past.

You’re writing about a people in the past. When you come to write about that people’s enemies, you can’t take your people’s view of them as the truth. You have to understand your people’s impressions of them as the usual half-truths, lies and distortions in circulation about a foreign, hostile culture.

Further, you can’t read only the history books focused on your people – in order to research that enemy people. Why can’t you do this? Let me quote Thomas Barfield on the case of China:

“Scholars who devoted their lives to exploring the history of imperial China, for example, so immersed themselves in the classical literature of that culture that they often unconsciously absorbed and accepted its values and worldview. Careful and critical about interpretations within the Chinese cultural sphere, when they wrote of those other people, ‘barbarians’, who threatened their civilization, it was usually from the Chinese perspective, with all the sympathy of a report by court scholars recounting the reception of a smelly envoy from the steppe come to insult the empire with an outrageous demand.”
[The Perilous Frontier, p. 4]

This is an acknowledged problem in Chinese scholarship – Barfield puts nicely what I’ve seen said a number of times. My interests are with China’s northern neighbours, where the problem – one-sided history, one-sided historical fiction – I’m convinced, is encountered at its worst. I think other histories haven’t had the problem as acutely as the China case (or else I just feel sorry for myself and my area of history). It’s an inevitable problem. These societies were so alien to one another they were in hostilities for thousands of years – nobody’s likely to have an equal interest in them both. China aficionados won’t love the steppe, which is so different. Steppe freaks – like me – won’t feel at home in China.

I face this problem, right now, as my guy goes to China, so I’m aware of it. It’s a big problem, because through my whole life I’ve been drawn to steppe-type cultures, but have not had that innate sympathy for all the societies Chinggis fights. Can I write about China fairly?

It is more usual for me to see the opposite: China fiction that has a visit from the steppes. And you might imagine that I’m hyper-aware of the unfairness I see. Yes I am. I try to shut up most of the time. I’m letting off steam in this general post of complaint.

Now I’ll drag in my example. It’s Guy Gavriel Kay. In fact he’s safe from criticism because his Under Heaven is historical fantasy. However, what he does, I pretty much see in historical fiction – so he’ll do for my example, and I’m not even bagging him out – because he has the fantasy clause and he’s allowed. How’s that for tact in these matters?

He’s obviously in love with Tang history, to which he pays scrupulous attention, even if he changes names. That’s why it’s a shock to travel beyond the Wall and meet – troglodytes. Troglodytes on the steppe, whom he uses for a Heart-of-Darkness journey into the primitive evils. Like I say, he’s allowed, it’s fantasy. But his Tang China is almost what it was, while at this time on the steppe stood the http://en.wikipedia.org/wiki/Uyghur_Khaganate. In which he happens not to have an interest. That’s fine.

It might irritate me… More irritating of course is the syndrome in historical fiction. Wherever you are in the world. You can’t take at face value what your people thought of their enemy. You can’t even trust the historians – not the old-fashioned ones – you can’t have uncritical faith in them, you have to subject the history to discrimination and scepticism, too. It helps if you go to books written about that enemy. Because it’s hard to get away from the skew: have you absorbed skewed history, in your research concentrated on – the enemy of your enemy? You need to learn to recognise the Schafers.

Let’s blame the historian, since novelists depend on historians. Edward H. Schafer is a perfect case of what Barfield described, above: he himself, as an historian, is entirely uncritical as he transmits Chinese views of the Uighurs. The Chinese records insult and scoff at Uighurs – so does he. His book is offensive. It’s also a classic on Tang, and cited by Guy Gavriel Kay. Whereas if Kay were to write historical fiction on Tang – which he isn’t, so never mind – he’d want to read several books upon the Uighurs that give you very different ideas.

Even if they are bit players – your people’s enemies – I believe it’s our duty, as the unprejudiced lot we aspire to be these days, to research them on their own terms, in their own right, and never perpetuate an old prejudice. Amen.

Edward H. Schafer, The Golden Peaches of Samarkand: A Study of T’ang Exotics, University of California, 1963

Image: Stereotype by Delacroix. Oops, I think he called this ‘Attila and his Hordes Overrun Italy and the Arts’. Sorry, Delacroix, I used your steppe art on my 1st book. 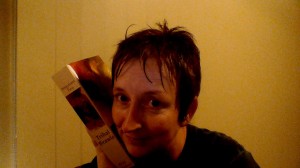