Available English translations of The Secret History of the Mongols, with my (personal) notes on them. 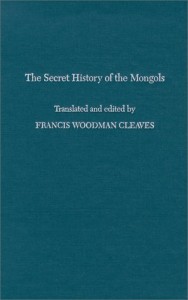 The translation I’m fondest of: Francis W. Cleaves, who has run afoul of the majority for his attempt at a King James Bible English. He argued that he should be archaic, like his original, and that the King James style was ‘singularly consonant’ with the matter in hand. Dammit, he was right. Isenbike Togan defends this style, which grants to the oral tradition of history, not just its true dignity but its true weight and strength for people of the time. Cleaves is obscure, but often because he is over-exact.

Sorry, but I find him more in sympathy with the material than other translators — which includes Igor de Rachewiltz. The latter you need too for study, because of its hundreds of pages of notes. Cleaves meant to put out a second volume with his notes, but never did: this volume only has brief footnotes.

The Francis W. Cleaves translation — alongside translations into other languages — can be downloaded in pdf at Monumenta altaica 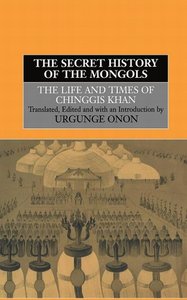 Urgunge Onon
The Secret History of the Mongols: The Life and Times of Chinggis Khan, Translated, Edited and with an Introduction by Urgunge Onon, Curzon Press, 2001

I like this for Urgunge Onon’s notes and material fore and aft — from key phrases/concepts to the Mongol art of war. Certainly better annotated than the Cleaves (who meant to put his notes into a second volume that never saw the light of day). Maybe this version is the best of both worlds: not off-putting for non-scholars, but with Urgunge’s knowledge on Mongol lifestyle and culture. 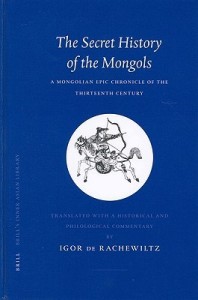 Igor de Rachewiltz
The Secret History of the Mongols: A Mongolian Epic Chronicle of the Thirteenth Century, Translated with a historical and philological commentary by Igor de Rachewiltz, Brill, 2004. Two volumes.

My complaint with this edition of the Secret History — unarguably the scholarly edition — is how frequently, in the notes, he’ll say ‘this issue has been discussed by [insert names] so I won’t comment on those lines.’ I’m an amateur Mongolist, at home, and for me, that’s an intensely frustrating habit. It often means that this book in my hands is least useful on the most important passages — since these have most work done elsewhere (which may be less accessible and/or in other languages), that he simply refers you to.

I prefer the translation of Cleaves, if only perhaps for its greater art. Cleaves is also more literal, but at least, when IdR paraphrases, he gives us the ‘lit.’ meaning in the notes. As for the notes… I can’t call them exhaustive, because of what he leaves out (see above). Detailed, although, I’d venture to say, more at home in language than in culture study. He does do interpretive work in his commentary, but for my part, I’m often in argument with him on interpretation. I can find him reductionist. His interpretations are also present in the translation text — often where he does not use the literal meaning.

John C Street has made available the pdf of a ‘shorter version’ (without the commentary): https://cedar.wwu.edu/cedarbooks/4/ 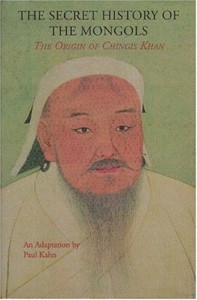 Paul Kahn
The Secret History of the Mongols: The Origin of Chingis Khan, An Adaptation by Paul Kahn

He calls this an adaptation, not a translation, and that’s my note of caution. It interprets for you, and often, I think, chooses a simple meaning out of several — one most likely to be understood by a readership unacquainted with things Mongol, not, perhaps, the most ‘right’. Still, it’s great for an easy-to-get and unfrightening English version. I love the Cleaves — Francis Woodman Cleaves whose translation he uses for this, but whose language he changes. Even though Cleaves’ presentation, the intro and how he sets out the text, is only fit to baffle you, and he never did publish the second part: the notes.

Urgunge Onon is another alternative: strictly a translation, but meant for a general audience. 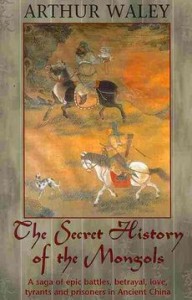 Arthur Waley
The Secret History of the Mongols and Other Pieces, (translated by) Arthur Waley, House of Stratus, 1963, 2002

This is an anthology of texts from China, Japan, Korea. If The Secret History is what you’re after, Waley only gives extracts. As he says himself, “Of The Secret History, I have translated only the parts founded on story-teller’s tales.” Whatever he means by that, it’s loose translation, story-style. He says he doesn’t believe in its historical value, so you won’t get the text as document here.

I won’t comment on what the cover tells you: “A saga of epic battles, betrayal, love, tyrants and prisoners in Ancient China”.

And here’s my shrine of Secret Histories, with my own offering of novels. 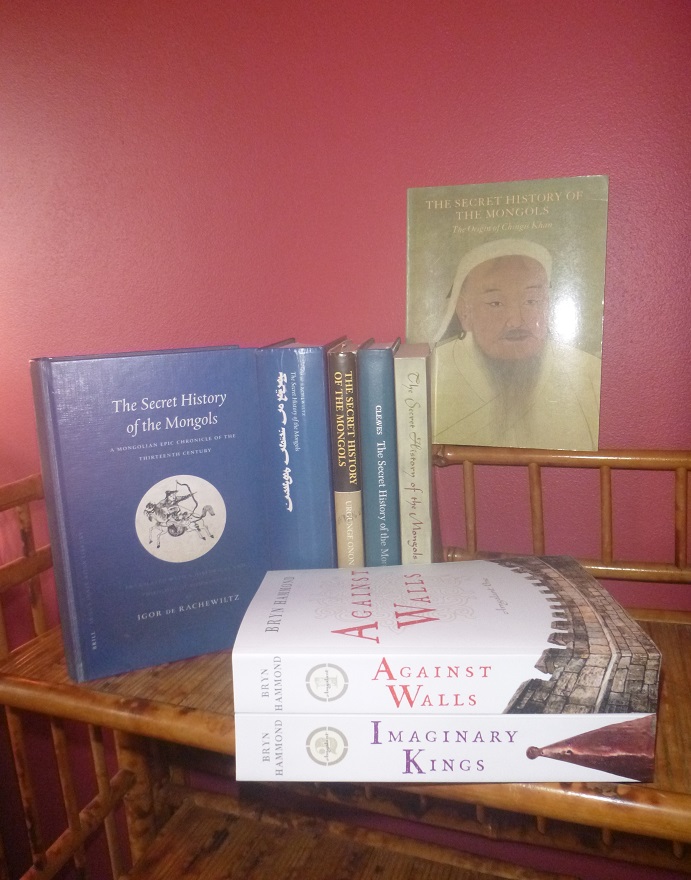 6 thoughts on “Translations of The Secret History”