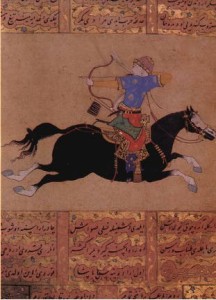 It ain’t easy to find your steppe epic in English. So I alert you to a project to translate the epic Manas online. Here’s the link: The Kyrgyz Epic Manas, selections translated, introduced and annotated by Elmira Kocumkulkizil.

It’s the epic of a people – a little like the Shahnameh used to be, perhaps; it’s THE epic, people didn’t bother to make up others, they just added to Manas. In fact the Kyrgyz don’t have epic singers, they have manaschi: singers of Manas. They celebrated the poem’s 1000th anniversary a few years ago. Wiki contests that age, but Wiki can argue with the ‘new independent government of Kyrgyzstan’ and cultural pride. The version from which you find great swathes here is half a million lines: take the Iliad and the Odyssey together and times by twenty… or since the lines are short, yes Wiki, let’s say by ten. It’s oral epic, written down and saved in sixty versions from the last of the oral poets alive, who in the tradition of their art have each an original rendition. The art is alive in Kyrgyzstan, just not exclusively oral. That changes things. 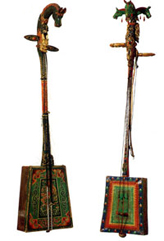 W. Barthold, of the wonderful book Turkestan Down to the Mongol Invasion, called it an absurd gallimaufry of pseudo-history. That’s the sound of a frustrated historian; fast and loose is the least of Turk epic’s attitude to history, quite as bad as Homer and the Trojan War. Nora Chadwick, my fave person on steppe epic, thinks this the peak of the art: The Kirghiz were said to specialize in epic poetry almost to the exclusion of saga and lyric, and to pay especial regard to finished and polished diction… An individual feature of the poetry of the Kirghiz, and one which shows the advanced character of the tradition, is its tendency to fall into cycles. She means, Manas is a cycle rather than a single poem, with shifts to different central figures. Thus the neverending story.