I think the person in the street knows by now, women were better off in barbarian societies. That’s a blanket statement I can conscientiously make. I have even thought, on my travels in the past, we aren’t the most feminist society that has ever been. I’m hesitant there, but I’d say, don’t make that assumption. If I were a woman in the Middle Ages, I’d want to be either Norse or from the steppe. So I have a laugh when I see macho projections onto Vikings or steppe hordes (that isn’t true: I don’t have a laugh, I have a cry).

It’s risky to let scholars intervene between you and the source material. They can skew your perceptions. In the Nibelungenlied (German, circa 1200), Brunhild warns her suitors: “He will have to cast the weight, follow through with a leap, and then throw the javelin with me. Do not be too hasty – you may well lose your lives and your reputations here,” said the charming woman. “Consider it very closely.”  And Hatto footnotes, There is always a touch of burlesque when Brunhild goes into action. I like you, A.T. Hatto; you translated a steppe epic, bless you; but why is this burlesque? Brunhild’s a riot, I grant you, but the butt of the burlesque is Gunther. The Nibelungenlied can be (mis)taken for misogynist. Its society, yes, which hides a girl away; but distinguish from that the author’s stance. Are we happy when Brunhild is robbed of her vast strength and Gunther manages to sleep with his wife? He can scarcely deserve her less. On his second attempt at a wedding night Hatto apologises for the poet, who as a child of his age, is shocked by her refusal to consummate the marriage. Is he? He’s thrown in a conservative sentence – at face value – but that has been a strategy of poets since. Does the story support a husband’s right? Doesn’t the story ask questions?

While we’re on this folklore motif – the girl who challenges her suitors to trials of strength – let’s visit Qaidu’s daughter Qutulun, over in Turkestan and eighty years after the Nibelungenlied was written: she put the folktale into practice. I love it when people decide to live out fiction. She had the wherewithal, and beat her suitors at wrestling. She didn’t have them killed, but only took a forfeit of horses.

Four centuries later – we’re in the 1650s now – a Dutch embassy to China, shortly after the Qing conquest, leaves us sketches of your typical northern woman, in contrast to Han Chinese. The women from the north strode around on big feet, with unpainted faces, while the Chinese were caked in make-up and didn’t walk anywhere on their lotus-feet. The Europeans seem amused and oddly charmed to meet these Tartar ladies – forward, free and easy, very hospitable – although the ambassador’s eyes might have spun when she unbuttoned him. Here are two encounters:

The Governor was by birth a Tartar, but understood not the Chinese language, therefore his sons were Interpreters. His Wife, a proper and comely Dame, spoke more than her husband, and was strangely inquisitive about Holland; she was not dismayed at our strange Arms, but like a bold Virago drew out our Swords, and discharged our Pistols, which much delighted her.

As we were riding out one day to take the air, we passed by the gate of the Old Imperial Court, where sat a great Tartar Lady, with her servants waiting upon her, about forty years of Age: She very civilly sent to our Interpreter to invite the Ambassadors into her House; Jacob de Keyzer hereupon alighted, and the Lady then made towards him: She was very debonair and free, looked upon our Swords, and much admired their bending without breaking: She took the Ambassador’s Hat, and put it on her own Head, and unbutton’d his Doublet almost down to the Waist: Afterwards she led the way into the house and desired him to follow… in her Apartment we found her standing with her Daughter about half her age, waiting our coming, in great state…. They set before us some of their Sweet-meats, much entreating us to Eat, excusing the meanness of their Entertainment, her husband being absent.

Case study: were the women heads-of-state in Qara Khitai regents or khans? Once China had a woman emperor, and only one historian dares to call her that. Christopher I. Beckwith explains: The sources indicate she was called ‘Emperor’ (Chinese, ti) during her reign. Although she is better known by her posthumous name, Empress Wu Tse-t’ien, I prefer to follow her own intentions and also to give her credit for her accomplishments; thus I call her ‘Emperor Wu’.  It’s a similar tale in Qara Khitai (or Western Liao; Central Asia, dates 1141-1218) where Michal Biran is the first to acknowledge the women khans for what they were: Two out of the five Gurkhans were women… According to the Liao shi [Chinese source], the Qara Khitai empresses were merely regents, who reigned only temporarily, until their male children or nephews reached majority. Both Qara Khitai empresses, however, were specifically nominated for the post by their predecessors… Muslim sources suggest that the empress held unlimited authority in her realm, as is also implied by her titles… In fact, it is clear that the empresses functioned as rulers in their own right. They had their own reign titles, a feature that no Liao (or Chinese) regent ever had; they bore the titles Gurkhan [Universal Khan] and Dashi; and they certainly determined the empire’s internal and external policy.

On matters of sexual violence (a subject I have to research; my God, wish me luck or grant me strength), I was deeply struck, early in my education, by the sheer enlightenment found in The Wife of Bath’s Tale, and yes, the kindness. Forget her Prologue, read her Tale. At eighteen or twenty I thought, this is so much more civilized than what I hear in the world today. 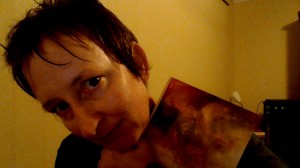