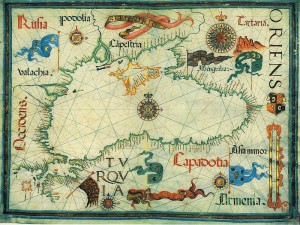 Chaucer set his Squire’s Tale at ‘Sarray, in the land of Tartarye’ – that is, Saray, city of the Golden Horde Mongols, Jochi’s ulus, above the Black and Caspian Seas. What did Chaucer know or care about a Tartar khan at Saray and his court?

The Squire’s Tale, as a romance, has been despised in the past; people have said it’s unfinished either because Chaucer had too much discrimination to go on or because the other Canterbury pilgrims stopped the squire’s drivel. You can read it yourself and judge. If you like medieval romances (adventure tales, with fantastic happenings, errant knights and wandering plots), there’s nothing wrong with it. It is unfinished, to the point that it’s only just begun. 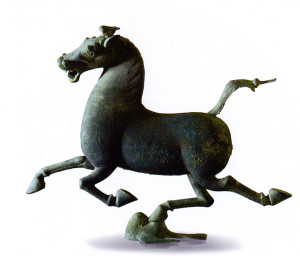 We are left with the khan’s daughter, gifted with a ‘quaint ring’ that lets her understand the talk of birds, having listened to the confession of a she-falcon, intent on self-harm, who has been seduced and left for a rival; the rest of the court are still asleep, after a grand feast whereat was given to the khan a flying horse of brass, that transports you anywhere when you tweak its ears. Nobody knows what happened next.

It used to be dismissed as a mishmash of wild marvels ‘for those who like that sort of thing’. Who knew that the Squire’s Tale had historical value? Carmel Jordan told the world in 1987 when she consulted archaeological work written in Russian, and saw that the Golden Horde was as spectacular as Chaucer describes (you can take a little trip with Ibn Battuta, to visit the khan in his gold-tiled tent in 1332-3). 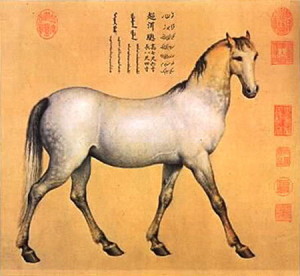 The setting, at least, wasn’t wild imagination; and furthermore, she suggests that every marvel had its real-life kick-off: the bronze horse, for instance, might have been put into Chaucer’s head by gift steeds that caused a stir at Mongol courts for their unusual size and general foreign glamour. The khans had a fascination with contrivances, too, that might inspire Chaucer’s magical ornamentation: the ingenious silver tree that dispensed drinks at Karakorum had its counterpart in Saray.

Chaucer, unfortunately, never set foot in Saray himself or indeed the Golden Horde. How did he come to be informed? In the latter 13th and the 14th centuries, near the end of which the Squire’s Tale was written, the khans of Saray and the Italian merchant republics operated in a symbiosis, for an unprecedented age of trade. Genoese, above Venetians, won the major part of the Black Sea trade, and moved with confidence in the Mongol world. Genoa also outstripped other Italian cities in trade relations with England. Chaucer took part in a delegation to Genoa for trade discussions in 1372-3; subsequently he was employed in Customs for the port of London. It is agreed he had ample opportunity, in diplomatic and commercial circles, to hear from Genoese their tales of Saray.

Recently Michael Murrin has written a great book on Trade and Romance: how romance, first turned by Marco Polo’s travels, changed from a ‘Celtic fantastic’ to a ‘marvelous real’ – set in Asia, and driven not by the interests of aristocratic fighting men, although these remain the heroes of romance, but by the adventurous activities of merchants. He posits a dual audience for such romances as the Squire’s Tale, both upper class and those who live by commerce. It is the case that fighting men didn’t visit Saray: merchants did (not that these merchants weren’t up for a fight). Merchants went further, and saw things undreamt of by knights. The popular romances followed in their steps – but doing this, they lost status, and were trivialised, too, in the scholarship. 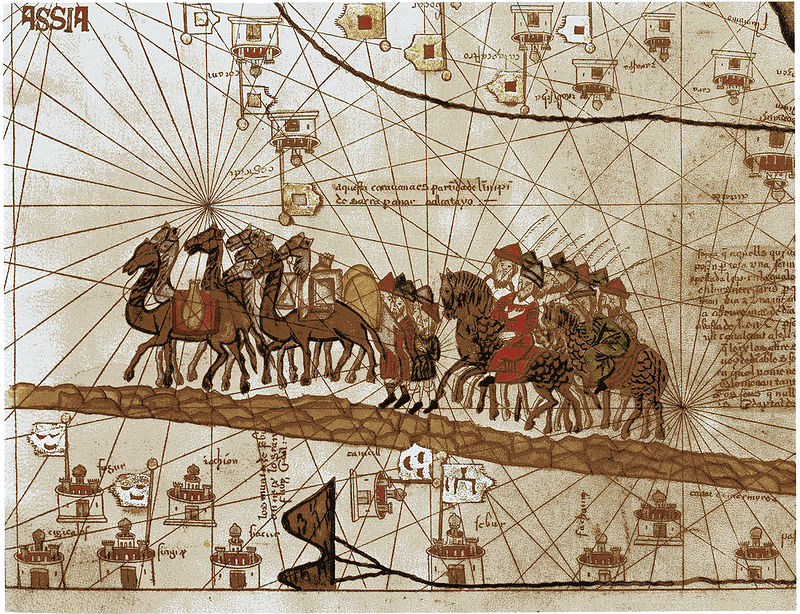 I’m fascinated by Chaucer’s trip of the imagination to Saray, and later adventures too of European romancers in the Mongol world. More to come.