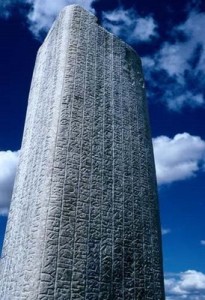 Today I read the beginning of Manas – the Kyrgyz oral epic – and was struck by Chingiz resemblances. Already I think Chingiz overshadows the story. I’m not alone: the introduction to the online Manas discusses its similarities to the Secret History of the Mongols. There are obvious clues. The father of Temujin’s wife-to-be has a dream… I’ll quote my own words, that are straight from the Secret History (of course): “In my dream I saw a gyrfalcon in flight, sheer white, with the sun and the moon in its talons. It flew down to me, as if I had cast the bird, and alighted on my glove with its trophies.” That’s a bold dream, you’d think, but the epic poem is three times as bold. Here’s what the future father of Manas dreams:

I don’t know (yet) what that signifies, except it’s fast and loose with the heavenly objects. I have had glimpses ahead to other Chingiz echoes, from the blood clot in his hand as he comes from the womb to, possibly, the manner of his death. It’s more than specifics, though… it’s the story, it’s the scope. I can only talk hazily now – I’ll get back to you.

I consulted another introduction to Manas, by R.Z. Kydyrbaeva. The poem, she says, “can be seen as an imaginary history of the Kyrgyz people, in which myths, fairy-tales, legends and historical events are inextricably interwoven.” She finds distinct echoes of the stele inscribed by Bilga Khaghan of the Blue Turks (pictured above) that I quote – almost word for word – early in Tribal Brawls:

“I did not come to the throne a rich king. I came to a weak people, without food on their inside, without clothes on their outside. Of this I spoke with my brother Kul Tegin, that the work of our father Elteresh for the Turks’ name and fame be not lost, and we spent, for love of the Turkic people, our nights without sleep and our days without a spell from labour. Our nobles and our people who had gone to foreign service came back on foot and naked. Forty-seven campaigns, twenty battles fought Elteresh; thirty-five wars fought Kul Tegin and I, to feed and clothe them.”

Up against this Kydyrbaeva quotes Manas:

She claims, “The very text of the epic, its compositional structure and stylistic qualities evoke the eulogy of Kul Tegin by Bilga Khaghan.”

And the common theme is unity – with the common weal of the people. “The whole spirit of the epic centres on the idea of unification, an idea that runs through Manas. It constantly stresses that fragmentation and intestine strife are signs of weakness.”

– R.Z. Kydyrbaeva, ‘The Kyrgyz epic Manas’ in C.E. Bosworth and M.S. Asimov, editors, History of Civilizations of Central Asia. Volume IV, The age of achievement: A.D. 750 to the end of the fifteenth century. Part Two: The achievements. Unesco, 2000.