I’m excited to see a project underway on a wall system that features in my novels:

perhaps the most enigmatic episode of ‘Great Wall’ construction in China and Mongolia: A wall system located in North China and Mongolia that covers a distance of over 3,500 km. The construction of this complex system, which includes long earthen walls and accompanying ditches, auxiliary structures and roads, is dated roughly to the 10th to 13th centuries CE, but it is unclear who built it, for what purposes, and how it functioned.

The Wall project, on the site of Gideon Shelach-Lavi:
https://gideonshelachlavi.huji.ac.il/wall-erc-project

This ‘enigmatic’ wall system has been wretchedly hard to research. Often referred to as the Jin walls on the guess they date to the Jurchen Jin dynasty, they are sketched in on maps, with sketchy accounts of them, and conjecture what they were for.

I make them Jurchen walls, and directed against Mongols — original Mongols, in the first place, and Great Mongols as Tchingis Khan sought to unify nomad peoples.

If you look at the map from the full project proposal: 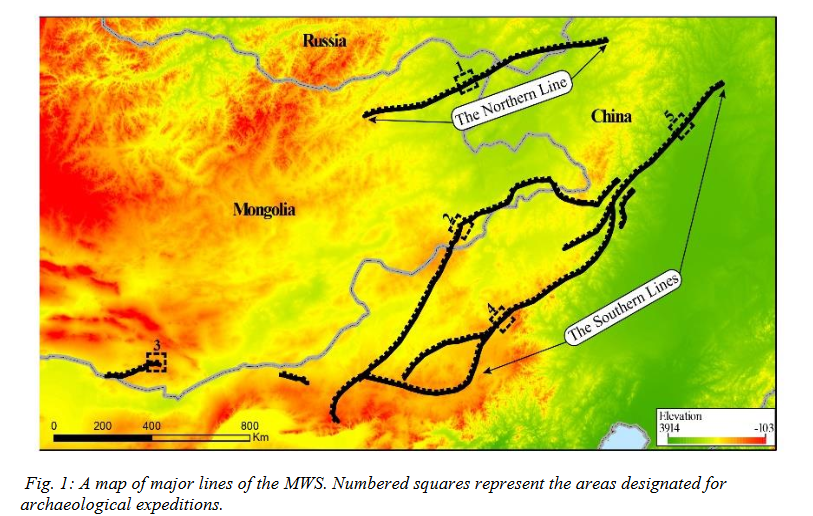 The Northern Line on the map is known to Mongols as ‘the Tribute Wall’ in the first of my trilogy, Against Walls. This is an installation to police them, and where they have to bring their tribute in sheep to the Jin government.

The Southern Lines are half-built at the time of Against Walls. You can see on the map the southernmost of them, described by Temujin’s father Yesugei and friends — from the inside — as ‘jaws open wide’. These are placed to close off grass and divide steppe peoples from one another. The other activity on the Southern Lines I am currently writing about in the third of my trilogy, Scavenger City.

The Wall project has a fascinating working hypothesis:

Our research hypothesis is that the medieval wall system was not built as a defense against invading armies, but rather as a means to monitor and sometimes stop the movement of nomadic peoples and their herds. The Wall project will test this hypothesis against a more conventional view of this wall (and other long-walls in world history) as a military installation.

I have been guided before by work of Gideon Shelach-Lavi, and this hypothesis — that walls might function as ‘a means to monitor and sometimes stop the movement of nomadic peoples’ — seems a possibility on lines familiar to me from his previous. I did a post on nomads as state evaders (https://amgalant.com/nomads-state-evasion/), where I squee over a chapter he wrote on how people might choose a pastoralist lifestyle. Were walls, sometimes, to hem them in?

From the project proposal:

The motives behind the construction of the MWS [medieval wall system], its political context and ecological implications, are highly relevant for the understanding of the complex history of China and Mongolia on the eve of Chinggis Khan’s rise to power.

In the third of my Amgalant trilogy, the rest of the Southern Line is built in reaction once Tchingis stands as a champion of People in Felt Tents. Along this wall, nomads are forcibly settled in order to control them. It becomes a battle over lifestyles.

I eagerly await more news from the project, hoping I can profit by some of its research before I finish Scavenger City.